Returning from Syria, Hercule Poirot travels on the Orient Express bound for Calais in the company of suspicious fellow-passengers.

Special Stamps to commemorate Agatha Christie – the biggest-selling novelist of all time.

Six of her greatest novels are interpreted in stylish designs. And in a twist befitting the genre itself, the stamps include hidden clues and references to the murder and mystery of the novels, printed in special inks and microtext. Amateur sleuths can find the ingenious features using UV light, body heat and good old fashioned detective work – preferably using a magnifying glass.

And while this is not the first time Royal Mail has used these design features on its stamps, it is the first time it has combined the use of all three in a single set.

Some of the hidden clues on individual stamps include:

This year marks the centenary of Agatha Christie writing her first detective story - The Mysterious Affair at Styles, in which she introduced the much-loved Belgian detective, Hercule Poirot to the world. This title, plus five of her most iconic works, are depicted on the stamps: Murder on the Orient Express, The Body in the Library, And Then There Were None, The Murder of Roger Ackroyd, and A Murder is Announced.

The stamps, which launched on the same day as Christie’s birthday (she was born 126 years ago in 1890), were designed by hat-trick design company co-founder, Jim Sutherland.

Agatha Christie, known as the ‘Queen of Crime’, is the world's best-selling writer, outsold only by Shakespeare and the Bible. The Agatha Christie catalogue consists of 66 crime novels, six romance novels (written under the pseudonym, Mary Westmacott), 150 short stories and 19 plays. Her works have been widely adapted and produced across most media platforms around the world, including TV, film, radio, stage and even on some very successful computer games.

She has sold over two billion copies of her books worldwide – one billion in the English language and one billion in over 100 different languages. Her books and fictional creations continue to entertain, with book sales averaging three to four million a year worldwide, and around 30 feature films and 200 TV productions having been screened based on her novels.

While her books are quintessentially English in their settings, as are most of her characters, the subject matter is surprisingly less cosy: murder, adultery, forgery and blackmail fill the pages. Since her debut in 1920, Agatha Christie’s books have never been out of print. She was the first crime writer to have 100,000 copies of ten of her titles published by Penguin on the same day in 1948 - A Penguin Million.

Hercule Poirot is featured in 34 novels, two plays and more than 50 short stories, making him one of the most famous fictional characters of all time.  In total, three Poirot novels are recognised by stamps.

Meanwhile, Miss Jane Marple appears in 12 novels and 20 short stories, making her first appearance well into her sixties. Two of her mysteries are recognised by stamps.

Agatha Christie’s grandson. Mathew Prichard, said: “I am delighted that, 100 years after she wrote her first detective novel, my grandmother’s works are being celebrated in such a unique way by Royal Mail. The ingenuity of her mysteries is cleverly represented in these distinctive designs, with the use of cutting edge technology - a welcome alliance of the traditional and the modern - adding to the delight. I am certain that Agatha Christie and mystery lovers will relish the puzzles that each stamp presents.”

Philip Parker, Royal Mail, said: “We are celebrating the genius of Agatha Christie with some mysterious and striking stamps. As the solving of mysteries is the focus of Christie’s art, it is fitting that the public have to turn detective to find the hidden words and images in each stamp.” 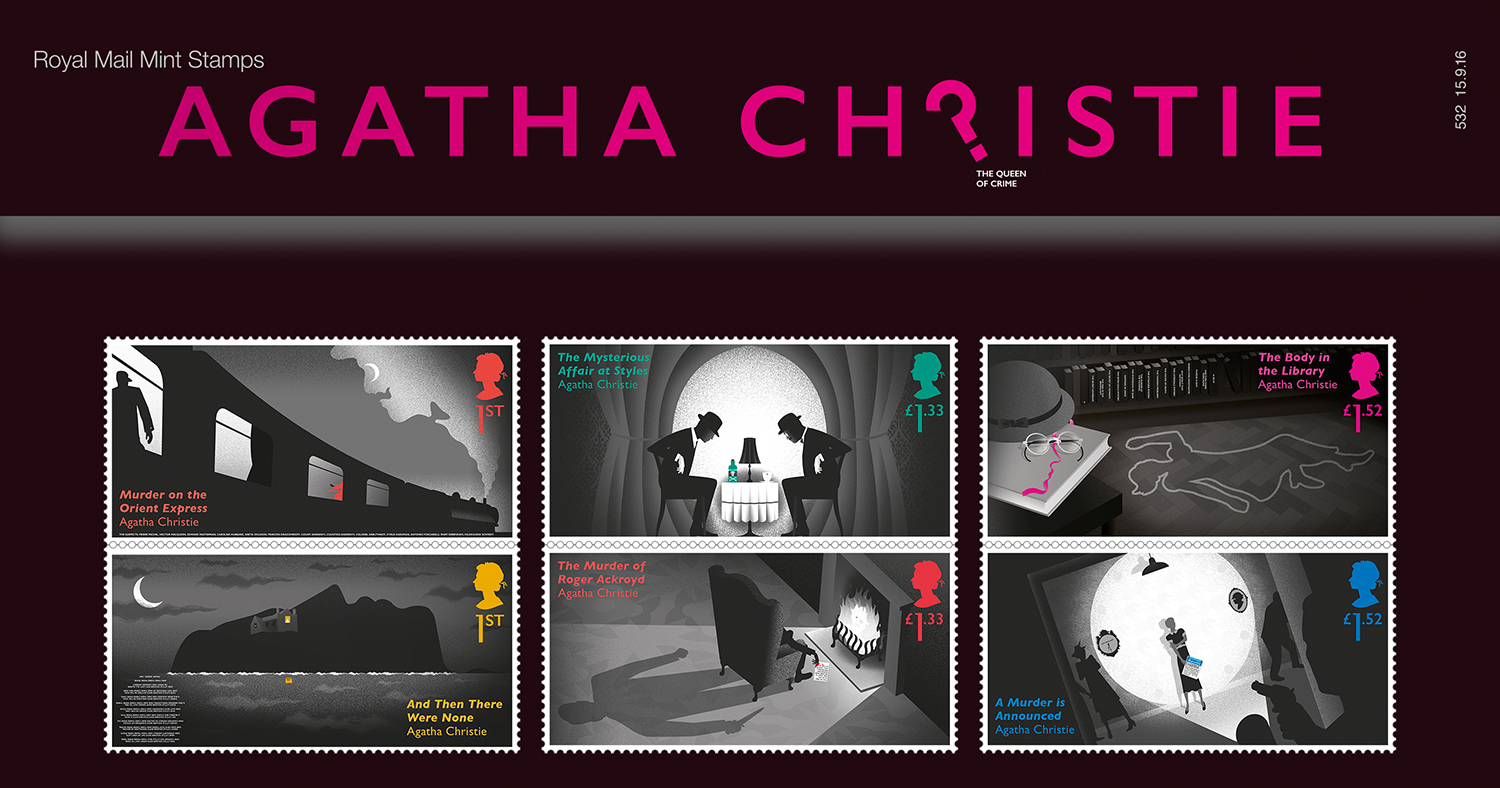 Murder on the Orient Express, 1934
Returning from Syria, Hercule Poirot travels on the Orient Express bound for Calais in the company of suspicious fellow-passengers. Mr Ratchett approaches Poirot saying he had been threatened and offers a large fee for him to take the case. Poirot declines saying, ‘I do not like your face’. That night Ratchett is murdered. The train is caught in a snowdrift and Poirot is persuaded to take on the case. The novel was shortlisted by the Crime Writers’ Association poll for the greatest crime novel of all time.

The Mysterious Affair at Styles  - written 1916, published 1920 (US)/1921 (UK)
In Christie’s first novel, the story is told by Captain Arthur Hastings, on sick leave in Essex after being invalided while serving in the First World War. He encounters Poirot in the village, having already made his acquaintance from working on a police case with him before the War. That same night a Mrs Inglethorp (of the house where Hastings is staying) dies of poisoning. Her husband is arrested and Poirot is enlisted to investigate. Afterwards Hastings becomes a kind of Watson to Poirot’s Holmes in numerous stories.

The Body in the Library, 1942
Mrs Dolly Bantry awakes to find a dead woman in her library. She calls her good friend Miss Jane Marple to investigate and the aged sleuth pits her wits against Inspector Slack. After a second murder Miss Marple sets a trap for the killer.

And Then There Were None, 1939
Eight people are invited to a remote island, attended by a butler and his wife. A gramophone plays a recording accusing each of murder, and then each is murdered in a way outlined in the rhyme Ten Little Soldier Boys. The police are baffled, but a chance discovery explains all.

The Murder of Roger Ackroyd, 1926
The classic whodunnit is narrated by Dr Sheppard, friend of Roger Ackroyd. Ackroyd is found murdered, in a room locked from the inside, with many suspects who have motives for murder. Sheppard’s next door neighbour is none other than Poirot who is invited to investigate. He is assisted by Sheppard’s sister, Caroline (thought to be the prototype for Miss Marple). The twist in the final chapter has divided critics and readers ever since it was published and is a cornerstone in the modern crime novel and a prime example of the ‘locked room’ style of mystery. The book was voted the ‘Greatest Crime Novel of All Time’ by the 600 members of the Crime Writers’ Association.

A Murder is Announced, 1950
In the personal columns of the local paper, an ad announcing a murder and a time and place is published. Assuming it is a party of some sort, half the village turns up. The lights go out and shots ring out. Leticia Blacklock (owner of the location of the shooting) lies injured next to a dead man. Chief Inspector Rydesdale thinks it is an accident or suicide, but encounters Miss Marple at lunch at the local hotel who examines the evidence and draws her own conclusions. She goes to the village to investigate the murders that ensue.

A 3D Augmented Reality version of the artwork was created for The Mysterious Affair at Styles stamp. The hidden elements within the stamp can only be revealed with a little digital detective work.

Hewlett-Packard’s augmented reality platform Aurasma was used to create an immersive AR animation. Using the Aurasma app, available through the iTunes App Store and Google Play, users can explore the scene being played out on the stamp – and are taken to the Royal Mail special stamps website when they discover the hotspot on a poison bottle in the picture.

The Murder on the Orient Express stamp also has a hidden interactive element. A hidden figure wielding a knife appears behind the train curtain when heat is applied to the area.

Royal Mail provided a special handstamp on all mail posted in a postbox in Agatha Christie’s town of birth, Torquay: 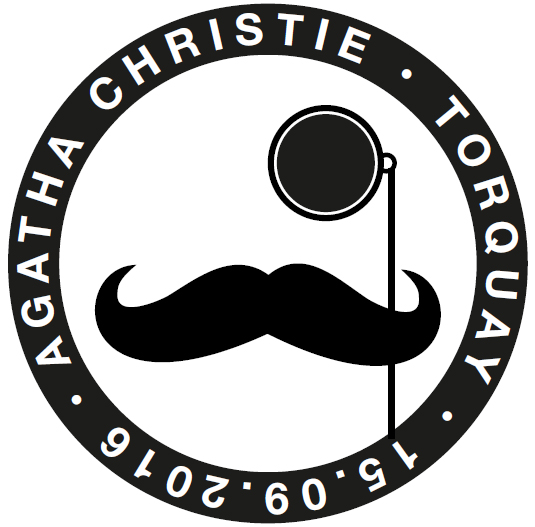 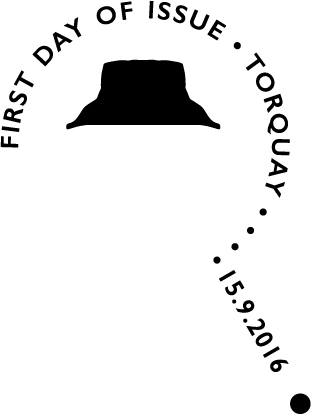 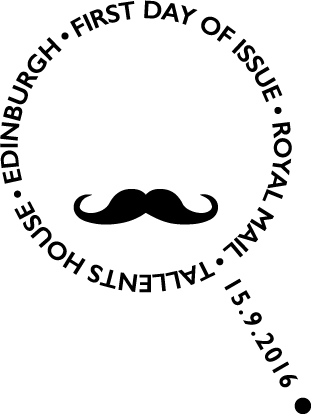