A masterpiece of artistry and skilled metalworking, this shield was found in the bed of the River Thames in the 1850s. Only the bronze metal face survives; originally it would have had a wooden backing. The metal part of the shield was made using four sheets of bronze and three circular decorative panels. They were joined together with rivets and enclosed by an edge-binding. A high domed boss in the central panel covered the handle. The complete shield is about 78cm (2½ft) long. The panels are made from thin beaten sheet bronze, decorated with repoussé, engraving and red-enamel inlay. The designs are Celtic in style, comprising interlocking circles and spirals connected by S-shaped curves. The shield is on display in the British Museum.

These eight stamps feature some of the most inspiring objects and atmospheric sites of British prehistory.

They explore how people lived in prehistoric times and depict famous iconic sites as well as some of the most exceptional artefacts from around the UK.

Illustrated by London-based artist Rebecca Strickson, the stamps have been designed as overlay illustrations, detailing how people lived and worked at these sites and used the objects.

The stamps present a timeline of prehistory, from a glimpse of ancient ritual of 11,000 years ago, to the Iron Age of around 300 BC. They indicate a huge degree of organisation in ambitious building projects, and sophistication in exquisite metal working.

For each of the stamps, Royal Mail will provide a special postmark on all mail posted in a postbox close to where the site is located or the artefact found. It will be applied for five days from 17-21 January, 2017.

Stamp illustrator, Rebecca Strickson, said: “When I was first approached to work with them on illustrating the Ancient Britain stamps, I was truly over the moon. This period in time has long been a fascination to me, and stamp collecting was something my late father adored in his youth. That these stamps are coming out on what would have been his 68th birthday makes me really smile.”

Philip Parker, Stamp Strategy Manager, Royal Mail, said; “The UK has an incredibly rich heritage of prehistoric sites and exceptional artefacts. These new stamps explore some of these treasures and give us a glimpse of everyday life in prehistoric Britain, from the culture of ancient ritual and music making to sophisticated metalworking and the building of huge hill forts.” 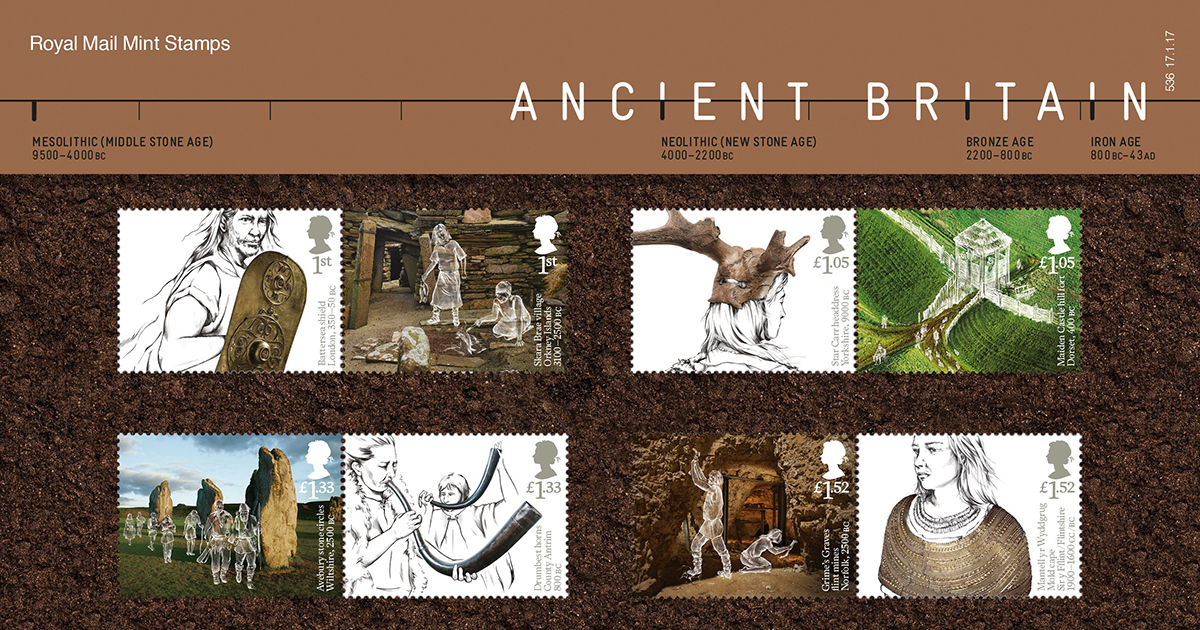 Battersea shield, London. 350–50 BC
A masterpiece of artistry and skilled metalworking, this shield was found in the bed of the River Thames in the 1850s. Only the bronze metal face survives; originally it would have had a wooden backing. The metal part of the shield was made using four sheets of bronze and three circular decorative panels. They were joined together with rivets and enclosed by an edge-binding. A high domed boss in the central panel covered the handle. The complete shield is about 78cm (2½ft) long. The panels are made from thin beaten sheet bronze, decorated with repoussé, engraving and red-enamel inlay. The designs are Celtic in style, comprising interlocking circles and spirals connected by S-shaped curves. The shield is on display in the British Museum.

Skara Brae village, Orkney Islands. 3100–2500 BC
Fierce storms in 1850 stripped away sand dunes on Orkney’s west coast to reveal traces of stone-walled houses. Subsequent excavations uncovered ten structures arranged on either side of a subterranean alleyway. The full extent of the settlement is not known, but middens containing domestic waste from centuries of occupation surrounded the houses. There was evidence that some houses had been replaced and the village remodelled during its long history. Each house is roughly square in plan with a single entrance, a central hearth, a dresser opposite the door and bed-boxes and storage facilities to either side. Some have small cells built into the thick walls, perhaps privies or stores. The inhabitants used beautifully decorated Grooved Ware pottery and had a rich material culture of worked stone and bone. Their diet was based on domesticated crops, wild plants, fish, seabirds and the products from sheep, goats, pigs and cattle.

Star Carr headdress, Yorkshire. 9000 BC
Excavations over the last 70 years have revealed three brushwood and timber platforms along the edge of what was once Lake Flixton, as well as evidence of houses on drier ground away from the shore. Among the rich collection of worked stone, flint, bone, antler and wood were more than 30 frontlets of red deer. All had been extensively worked, with the antlers trimmed, and some had holes cut through the skull. These strange items were probably masks or some kind of headdresses. They may have been used as a disguise in hunting or during ritual performances in which people took the place of an animal. It is likely that the original skin formed part of the attire, which may have been worn by shamans when communicating with animal spirits.

Maiden Castle hill fort, Dorset. 400 BC
A long sequence of occupation on this hilltop overlooking the River South Winterborne was revealed through excavations in 1934–37 and 1985–86. Early occupation includes a causewayed enclosure at the eastern end built around 3550 BC, a long mound along the spine of the hill built around 3400 BC and an early hill fort with a single rampart enclosing 6.4ha (nearly 16 acres) built around 600 BC. The great multivallate hill fort whose earthworks dominate the site today was built around 400 BC, enclosing 19ha (47 acres) – the largest hill fort of its type in Britain. Three concentric ramparts follow the contours of the hill. Entrances at either end have strengthened defences with outworks and staggered gateways. Timber gate-towers and palisades along the top of the ramparts provided extra security. The depth and complexity of the defences was an impressive display of strength at a time when sling warfare was common. Numerous round houses and associated storage facilities lay inside.

Avebury stone circles, Wiltshire. 2500 BC
Avebury is Britain’s largest prehistoric ceremonial monument, defined by a bank 5m (16ft) high and an internal ditch originally some 9m (29½ft) deep. Four entrances give access to the flat central space some 350m (383yd) across which once contained a series of stone structures. Following the edge of the ditch was Britain’s largest stone circle, comprising 98 unworked pillars of local sarsen stone. Within there were two further circles. The southern circle of 29 pillars surrounded a single standing stone or obelisk. The northern circle of 27 pillars surrounded a ‘cove’ of three massive uprights forming the sides of a box-like structure open to the northeast. The massive earthworks possibly served to contain powerful spirits while providing a grandstand from which to observe ceremonies inside the henge. At least two of the entrances link with stone-lined avenues defining pathways out into the landscape that connect Avebury with nearby monuments and the River Kennet.

Drumbest horns, County Antrim. 800 BC
Four complete cast bronze horns were found in a bog in 1840. Such finds from wet places are not uncommon and must have been offerings to the gods of the underworld. Experiments show that these instruments would have made deep resonating sounds when played like an Australian didgeridoo. Two of the horns were side-blown and could have provided a backing drone; the other two were end-blown through a cast-on mouthpiece and could have carried a melody. Rings would have held straps to support the instruments while being played in public rituals, battles or during raids. More than 100 horns are known from over 50 find-spots across Ireland. Regional styles can be recognised, and on a wider compass they are closely connected to the lurs of southern Scandinavia and the Baltic coastlands.

The horns are on display in the Ulster Museum, Belfast.

Grime’s Graves flint mines, Norfolk. 2500 BC
Flint was crucial for making edged tools and weapons in prehistoric times. Much of the best flint was obtained from mines in the chalklands of southeastern Britain. Typically, a shaft some 6m (nearly 20ft) across was dug to reach bands of good-quality flint. Radiating galleries were then cut to follow the flint, often linking with galleries from other nearby shafts. At Grime’s Graves, around 600 shafts are currently known, some up to 14m (46ft) deep, but only a handful have been archaeologically excavated. The earliest known workings date to before 3000 BC, with use of the site continuing through to about 1900 BC. Each shaft required the removal of about 1000 tons of chalk and overburden to obtain around eight tons of flint. Some flint was exported to far-flung communities as nodules, but much of it was worked into tools as it came out of the ground, and these were traded across the country.

Mantell yr Wyddgrug/Mold cape, Sir y Fflint/Fintshire. 1900-1600 CC/BC
Made by hammering out a 700g (1½lb) ingot of gold, this dazzling object formed the upper part of an elaborate garment that was restrictive to wear but stunning in its impact. It was found by workmen in 1833 while quarrying stone from a large round barrow. Contemporary accounts suggest that it covered the fragmentary remains of an inhumation burial in a stone-lined cist. Amber beads lay in rows on the cape, and a bronze knife was nearby. Pieces of bronze, two gold straps (perhaps pieces cut from a second cape) and traces of cloth were all that remained from the rest of the garment. With the cape just 465mm (18 in) wide, the wearer must have been young or of slight build. The craftsmanship displayed is exceptional: three zones of repoussé decoration formed of concentric lines of ribs and bosses mimic multiple strings of beads and the folds of cloth. The cape is on display in the British Museum. 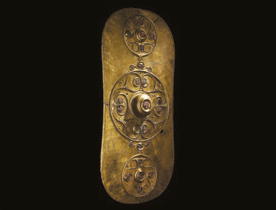 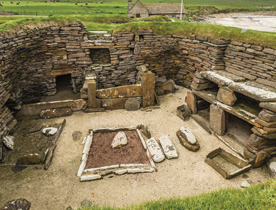 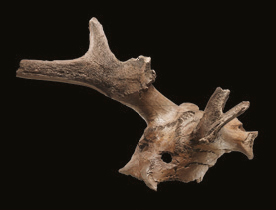 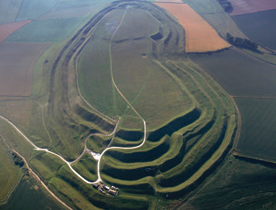 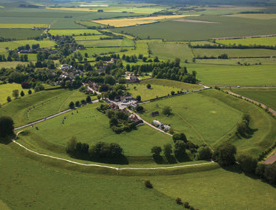 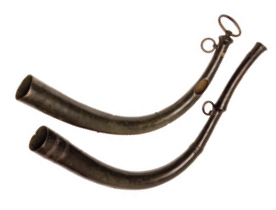 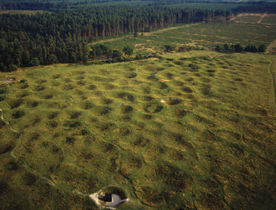 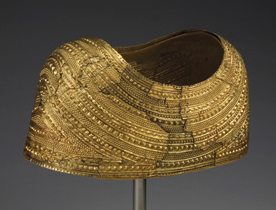 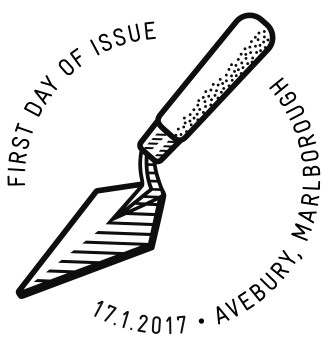 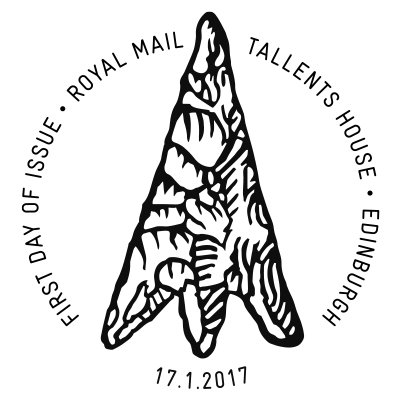