The Tale of Peter Rabbit

To mark the 150th Anniversary of the birth of Beatrix Potter we released a set of Special Stamps. The 10-stamp issue celebrates the timeless characters she created and which are still loved the world over.

Philip Parker, Royal Mail, said: “Beatrix Potter created unforgettable characters which have been loved by successive generations. Our new stamps mark the anniversary of her birth with some of her most popular creations.” 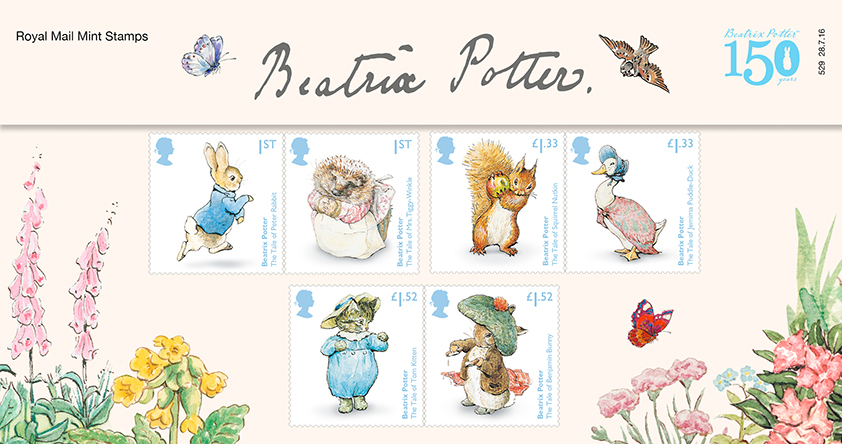 The Tale of Peter Rabbit - First published in 1902
When Mrs. Rabbit leaves for the baker’s, Peter runs straight to Mr. McGregor’s garden and squeezes under the gate. A terrifying cat-and-mouse game ensues, during which Peter loses both his shoes and his new jacket.

Beatrix conceived the story of Peter Rabbit in September 1893 in a delightfully illustrated letter to Noel Moore, the five-year-old son of her friend and former governess, Annie Moore. Beatrix had purchased the real Peter Rabbit two years earlier in Shepherd’s Bush, London, and drew inspiration for the setting of her published tale from several locations, including the potting shed at Bedwell Lodge in Hertfordshire, and gardens at Lingholm in Keswick, Cumbria and Tenby, Pembrokeshire.

The Tale of Squirrel Nutkin - First published in 1903
Beatrix wrote the story in a picture-letter to Noel Moore’s sister, Norah, in September 1901, having conceived the idea for it four years earlier in a letter to Noel. On both occasions, Beatrix was residing at Lingholm, a house on the north-west shore of Derwentwater with dramatic views across the lake to St. Herbert’s Island – Owl Island in the story.

The Tale of Benjamin Bunny - First published in 1904
The setting for the tale is Fawe Park, a commodious house on the north-west shore of Derwentwater. Beatrix stayed there with her family in 1903 and sketched “every imaginable rabbit background”, including an assortment of flower pots, cold frames and tubs in the kitchen garden. The real Benjamin Bunny, however, had come “to a premature end” years earlier “through persistent devotion to peppermints”.

The Tale of Mrs. Tiggy-Winkle - First published in 1905
Between 1871 and 1881 the Potters spent the summers at Dalguise House in Perthshire. Kitty MacDonald was their washerwoman, “a comical, round little woman”, who wore a “multitude of petticoats and a white mutch”. Beatrix located her tale in the picturesque Newlands Valley with the slopes of Catbells rising in the distance. The real Mrs. Tiggy-Winkle was a comical model; if “propped up on end for half an hour” the hedgehog would “yawn pathetically” and bite.

The Tale of Tom Kitten - First published in 1907
The tale was the first to be located at Hill Top. Beatrix borrowed the name Tabitha Twitchit from a cat belonging to the wife of the local Sawrey blacksmith. In 1906 Beatrix was planting her garden with cuttings from neighbours, “something out of nearly every garden in the village”. Many flowers depicted in her tale survive, including the roses, snapdragons and Japanese anemones around the porch.

The Tale of Jemima Puddle-Duck - First published in 1908
Beatrix dedicated her “farmyard tale” to Ralph and Betsy Cannon, the children of her farm manager at Hill Top Farm in Sawrey. Her illustrations depict the Cannon family, the farmhouse and its outbuildings, the Tower Bank Arms public house and other village locations, including a magnificent view across nearby Esthwaite Water. Jemima was the name of one of the ducks at Hill Top Farm. Kep, however, was Beatrix’s favourite sheepdog, and the “intelligent and sympathetic” hero of her story. 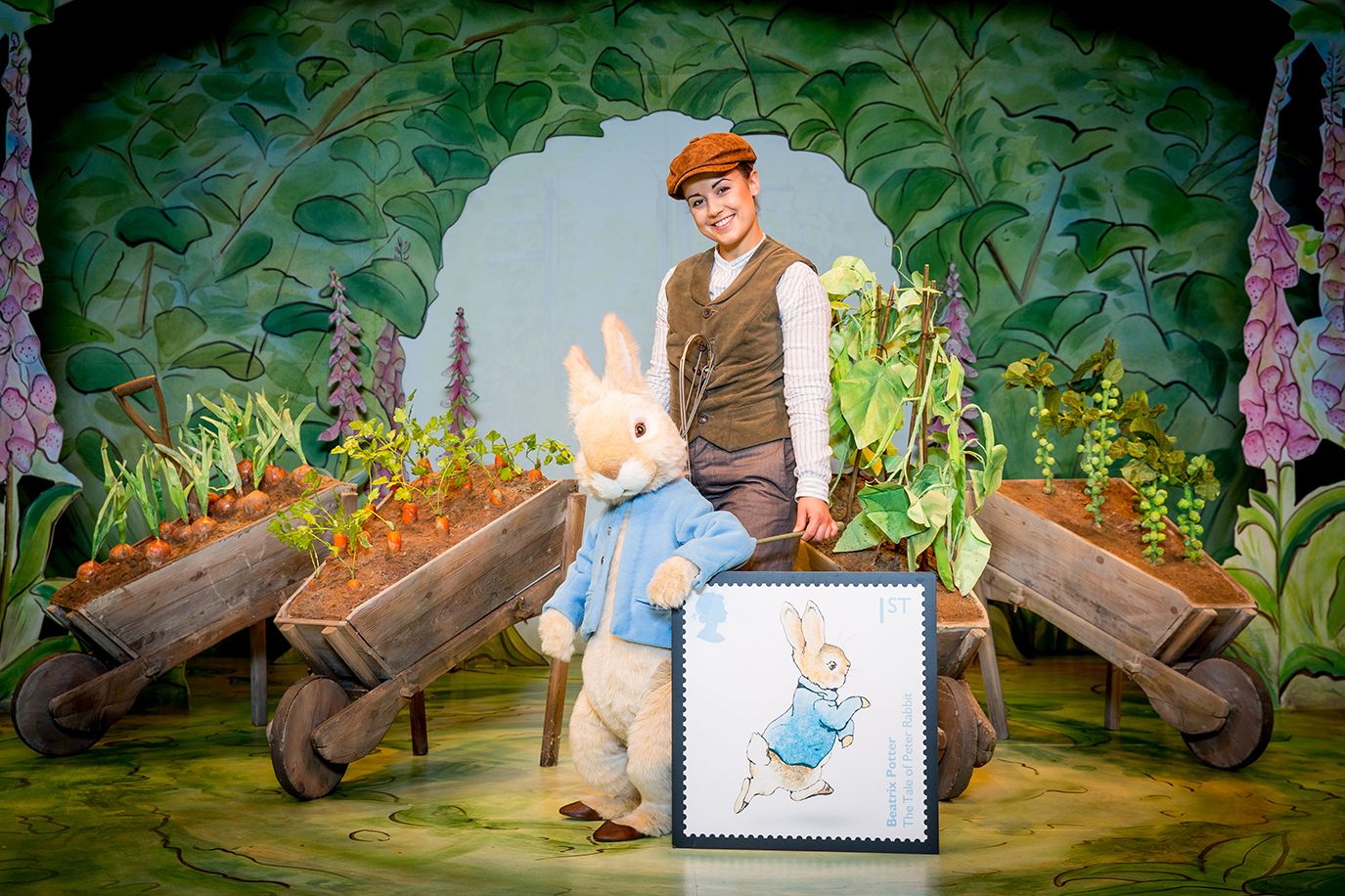 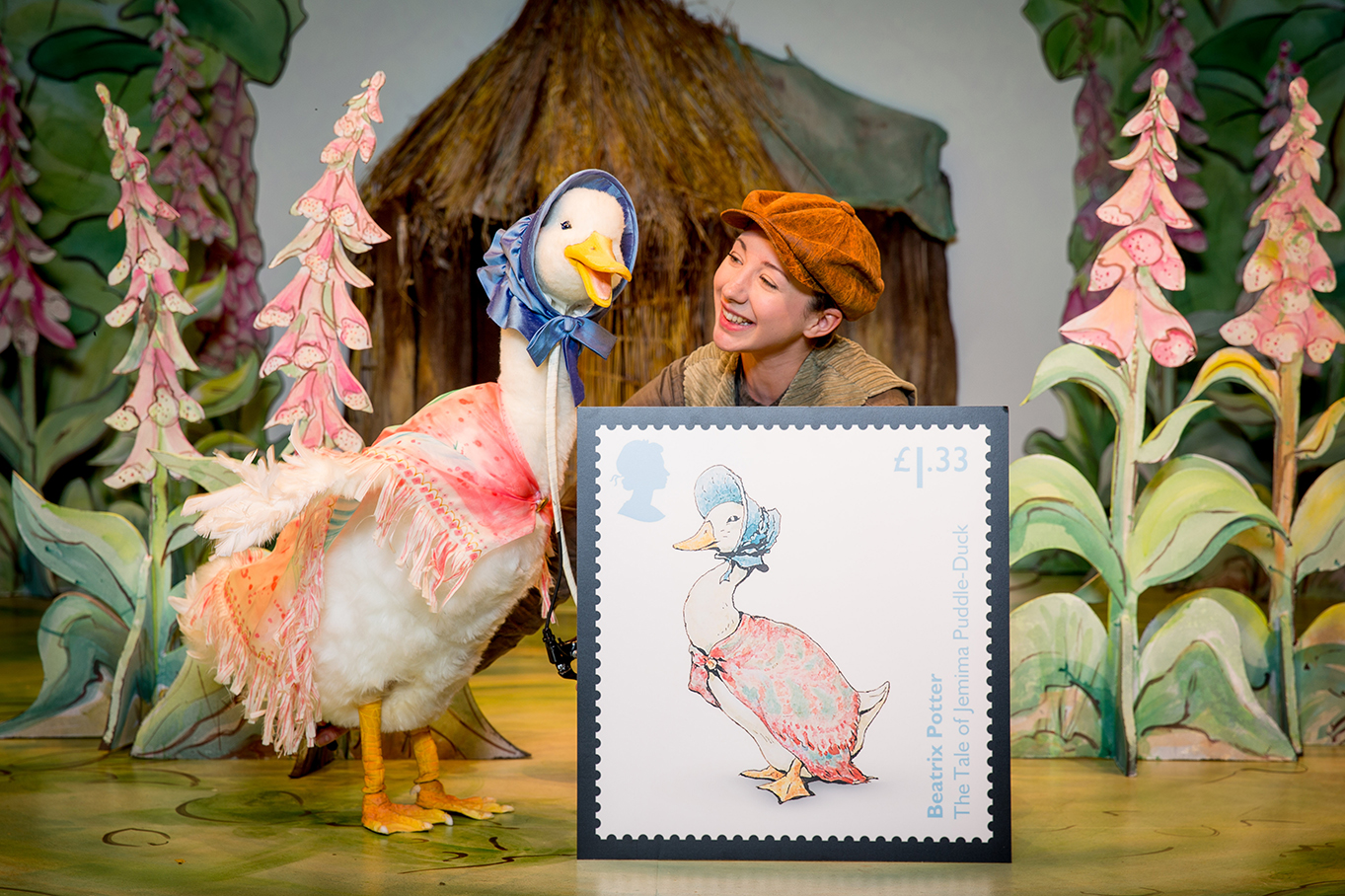 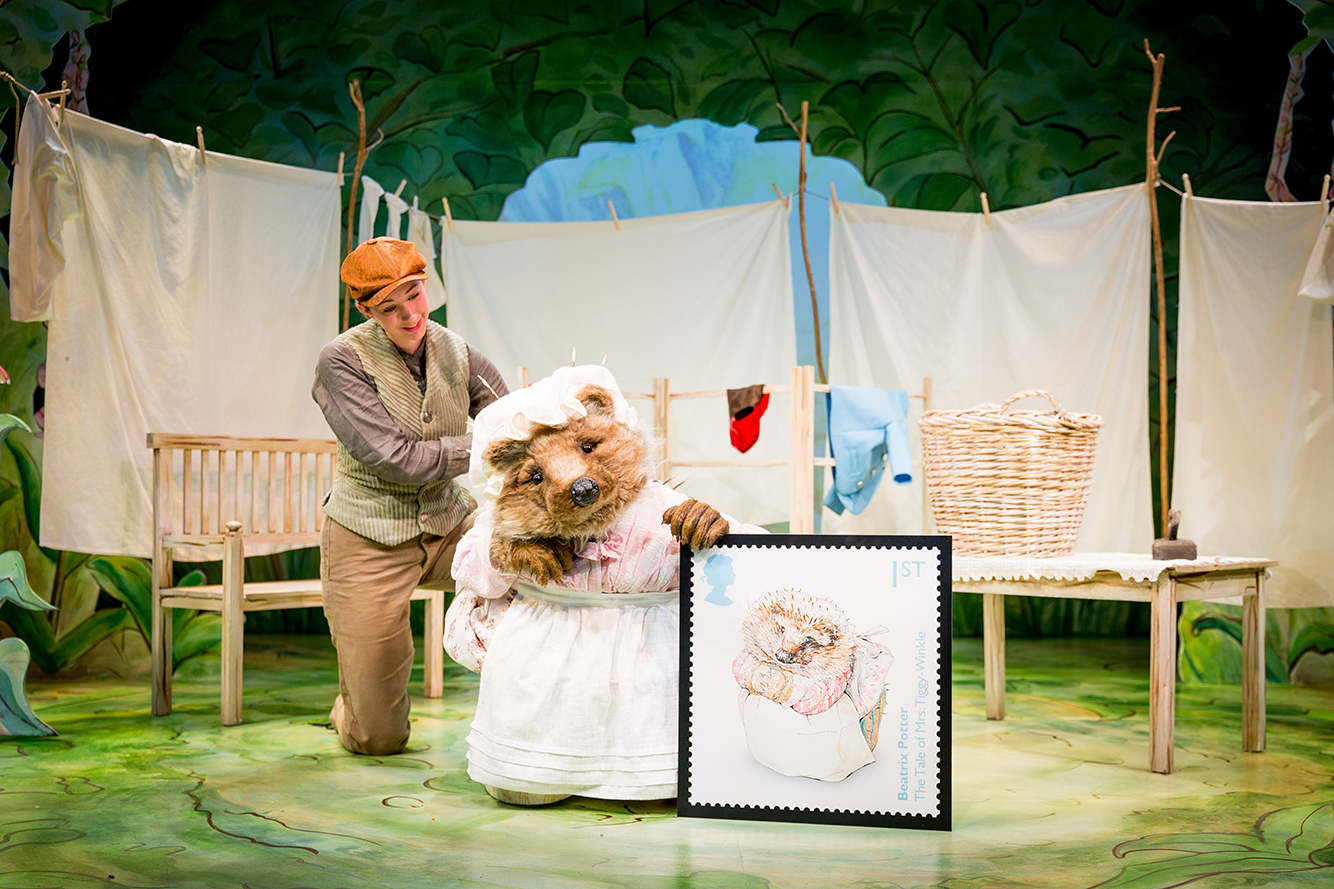 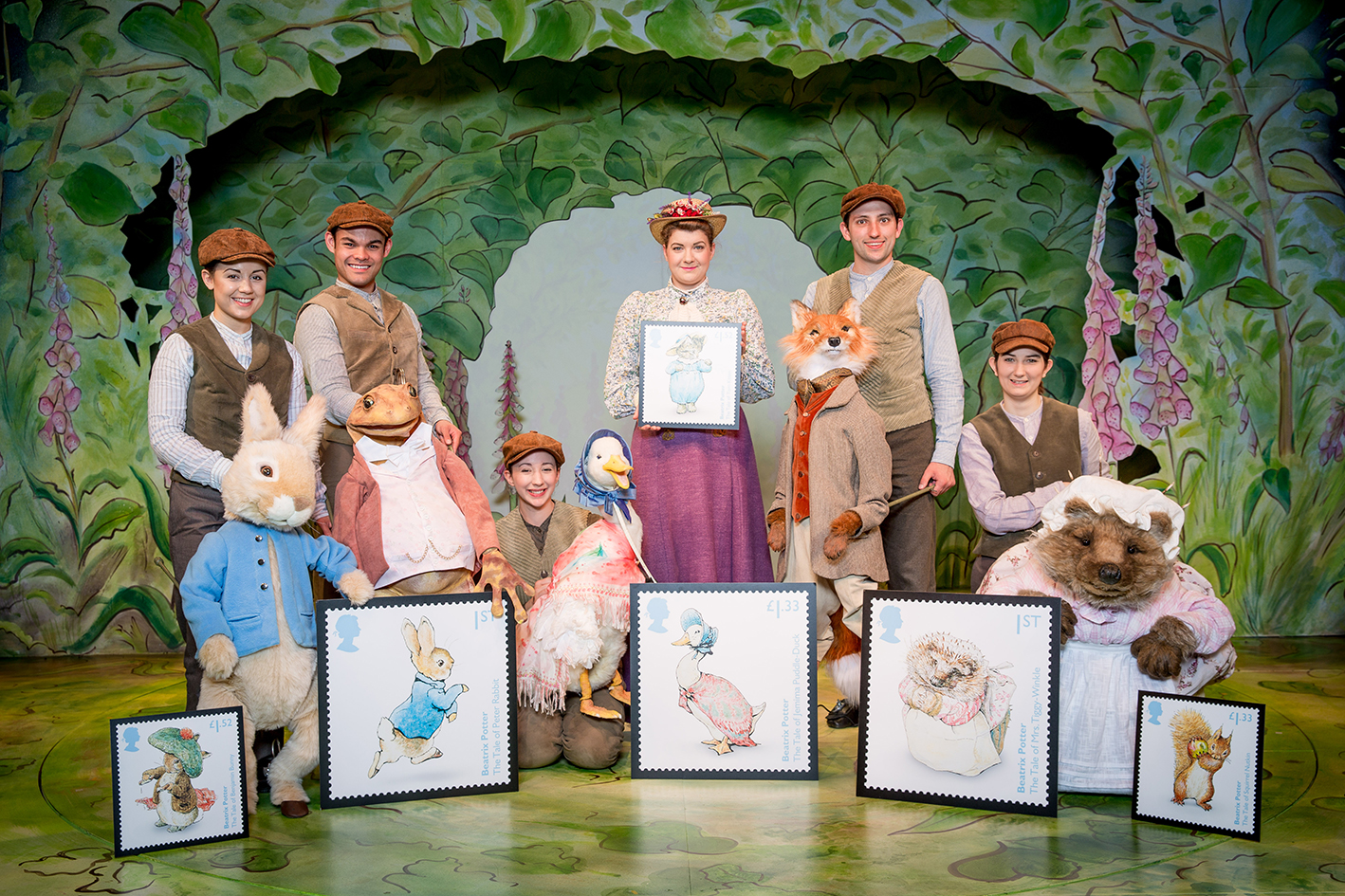 Peter Rabbit handstamp
For seven days from 28 July to 3 August, Royal Mail provided a special handstamp on all mail posted in the post box located on at the junction of the B5285 and Stones Lane, the actual postbox Beatrix Potter used while she lived at Hill Top Farm. The image to be used is one of the first sketches Beatrix made of Peter Rabbit. 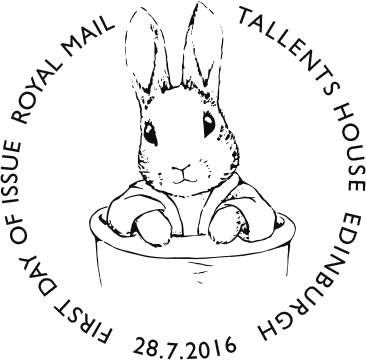 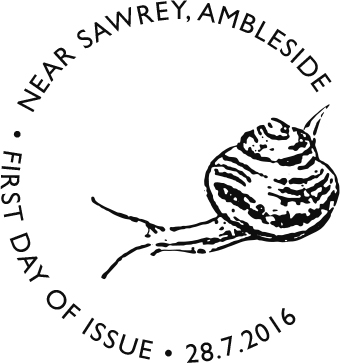 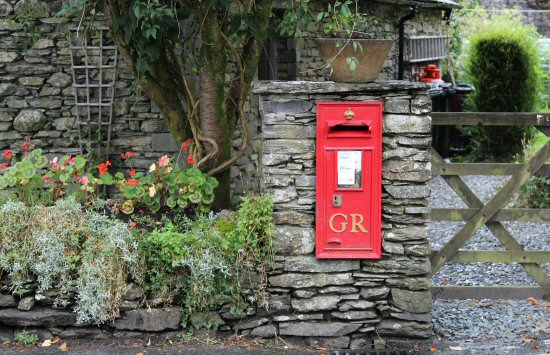