These Special Stamps celebrate feature some of the most iconic and much-loved British toys from the last 100 years.

In the 19th century, the growing middle class of the Victorian era was fuelling an expansion in toy-making and major names in British manufacturing started to appear and compete with foreign makers.

Previously a producer of mechanical toys, W. Britain pioneered the hollowcast method of figure-making: made using less molten metal, toy soldiers were both lighter and significantly cheaper to produce.

British manufacturers grew in confidence as the 20th century progressed. Soft-toy companies, including Merrythought, which still produces luxury bears to this day, began to take on the might of European giants such as Germany’s Steiff.

In 1938 Frank Hornby launched the Hornby Dublo train set. The following years would see the arrival of some of the biggest names in the history of toys – Fuzzy-Felt (1950), Sindy (1963), Action Man (1966) and the Spacehopper (1969) all materialised in a wild two-decade span, as well as Spirograph (1965) and Stickle Bricks (1969), which were two exceptional and enduring innovations that helped inspire young minds and encourage creativity.

By the early 1960s, Britain was exporting more toys than all but three other countries, with annual sales totalling over £7 million.

The heyday of the British toy industry remains a magical era, one that shaped childhoods across the generations. And with many of the best-loved toys from the past still with us, or perhaps relaunched after temporary absences, the children of today can still have fun with some of the world’s most iconic toys.

Royal Mail spokesperson Philip Parker said: “British toy makers enjoyed a reputation for quality and innovation, and these nostalgic stamps celebrate ten wonderful toys that have endured through the decades.” 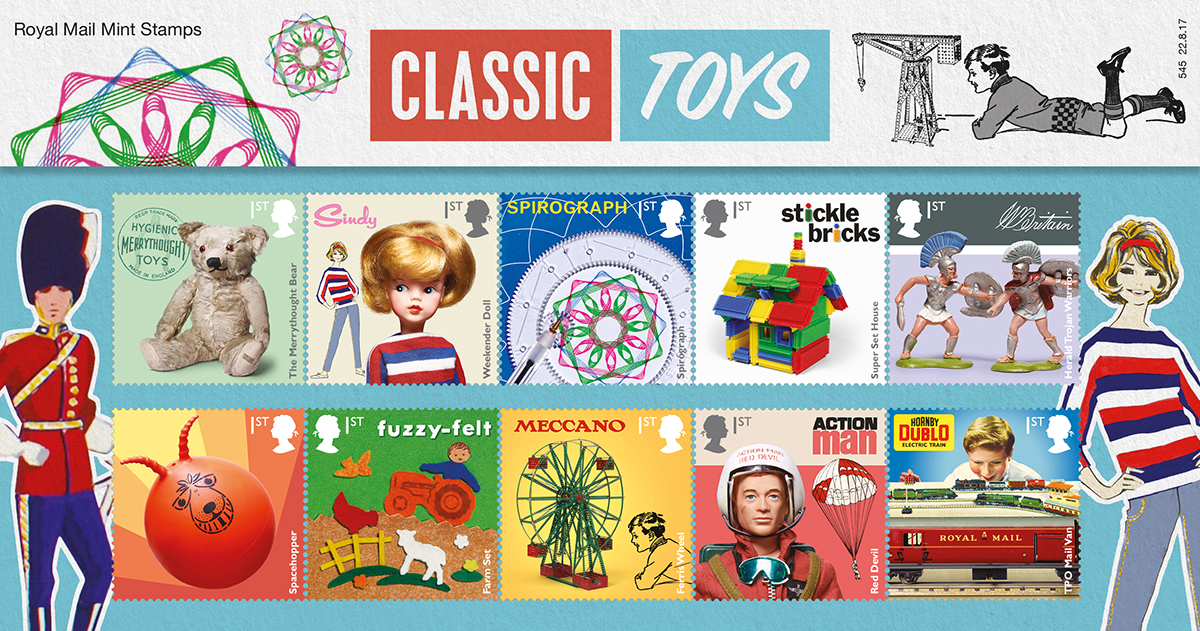 SPACEHOPPER
The precise origins of the ever-popular Spacehopper are uncertain, but what is known is that in the 1960s Aquilino Cosani patented a ‘Pon-Pon’ exercise ball that had many of the Spacehopper’s features. Marketed over the years under names such as the ‘Hoppity Hop’, the traditional Spacehopper was first introduced to the UK in 1969 by toy makers Mettoy. Originally blue in colour, and produced in a range of sizes, this large rubber ball with ribbed handles is best known for its bright orange colour and kangaroo face. Production rocketed in the 1970s as more and more children took to leaping about on a Spacehopper. For almost 50 years it has brought fun and happiness to millions of children, and currently has the status of a 21st-century retro toy.

MECCANO
The idea for Frank Hornby’s unique construction system originated in 1898, when he was trying to source small parts for a model crane that he was making with his sons. He realised that it would be possible to make all sorts of models if children had immediate access to parts, such as metal strips and plates with holes in, which could be fitted together with nuts and bolts “in different positions and at different angles”. After the invention was patented in 1901, the first ‘Mechanics Made Easy’ sets were produced in 1902. Five years on, Hornby changed the product name to ‘Meccano’. Enquiring young minds worldwide were immediately inspired by Meccano and remain so to this day.

STICKLE BRICKS
Invented in the UK in 1969, Stickle Bricks offered an easy introduction to the world of construction toys. Designed to develop the imagination of young children, thanks to the appealing combination of chunky bricks in attractive bold colours, Stickle Bricks became a much-loved toy that encouraged children to stick, stack and build.

Thin plastic ‘fingers’ on the edges and sides of the bricks interlock easily and can also be pulled apart with little difficulty, allowing for exciting experimentation. Sets contain a mix of square, rectangular and triangular pieces, as well as heads, wheels and teddy-bear shapes, which can be joined together in many creative ways. The true charm of Stickle Bricks was neatly captured in an original promotional slogan: “An easy new way to build big toys!”

SPIROGRAPH
A drawing toy invented in the UK in the mid-1960s, Spirograph was originally developed as a drafting tool. As its design evolved, it soon became clear that Spirograph had even greater potential as a child’s toy.

Its distinctive wheels and gears, which combine the principles of mathematics and art, have enabled children of all levels of artistic ability to create decorative, intricate patterns. Beautiful designs can result from using different combinations of small gears placed either inside or outside a larger gear, which are moved, one along the other, using pens of varying colours. Spirograph has been inspiring children across the world for the past 50 years and continues to do so to this day.

THE MERRYTHOUGHT BEAR
Merrythought’s quintessentially British teddy bears have been hand-crafted in Ironbridge, Shropshire since 1930. Founder of the company, Gordon Holmes, was the owner of a spinning mill in Yorkshire when he realised the possibilities of using mohair – the fleece of the Angora goat – in the production of soft toys. In 1931, the first catalogue revealed an eclectic range of 32 soft toys, including the original Merrythought teddy bear, whose patterns many of today’s designs are still based upon. The exceptional quality of Merrythought toys soon attracted high-end retailers such as Harrods. The company has continued to produce the finest soft toys in a variety of shapes and sizes for more than 85 years, appealing to children and adults of all ages.

FUZZY-FELT
For more than 65 years, Fuzzy-Felt has been encouraging the creativity of children three years old and upwards in the crafting of imaginative scenes using colourful pre-cut felt shapes that can stick on a flocked backing board. Perhaps less well known is the fact that the toy’s origins lie in the production of tanks during the Second World War. The tanks’ gaskets were made of felt and the manufacturing process created small offcuts which the factory workers’ children would play with. Lois Allan, whose outbuildings were used to make the gaskets during wartime, saw the potential for developing the idea, and launched the first Fuzzy-Felt set in 1950. The original felt pieces were plain silhouettes and later evolved into more detailed printed shapes on themes such as farm animals and dinosaurs.

ACTION MAN
Two years after the GI Joe toy arrived in the USA, in 1966 Palitoy introduced the youth of Britain to an exciting new toy called Action Man. This fully poseable action figure was originally produced in three different versions: Action Soldier, Action Sailor and Action Pilot. Each had painted hair (either black, brown, red or blond), a scarred face and came packaged with a basic uniform and dog tag.
Action Man’s design was regularly updated: 1970 saw the addition of flocked hair; in 1973 the figures were fitted with ‘gripping hands’; the introduction of ‘Eagle-Eyes’ in 1976 enabled children to move the eyes by operating a small lever at the back of his head. Depicted on the stamp is the Red Devil parachutist.

SINDY
In September 1963, Pedigree Toys Ltd launched Sindy, Britain’s new teenage fashion doll dressed in a range of outfits created by cutting-edge designers Foale and Tuffin. Sindy’s first collection included her iconic Weekender (in a red, white and blue matelot top with bell-bottom jeans), as modelled on the stamp, as well as Skating Girl and Pony Club. Later in the 1960s, Sindy was joined by her then boyfriend Paul, sister Patch and friends Vicki, Mitzi, Poppet and Betsy. Over time, Sindy’s look, fashion and style have gained her millions of fans across the world who regard themselves as true ‘Sindy Girls’.

W. BRITAIN TOY FIGURES
It was in the late 19th century that W. Britain Limited (also known as Britains and William Britain) first enjoyed success in the business of making toy soldiers. From 1893, W. Britain began producing hollowcast figures. The company dominated the market with these products until the 1950s, when plastic figures made by firms such as Herald grew popular.
W. Britain bought out Herald in 1959 and began a new phase manufacturing 1:32 scale figures in plastic. Sold individually or in packs, the brightly painted toys, including Trojan and Greek warriors, British infantry and Wild West cowboys, fired children’s imaginations and became playroom essentials.

HORNBY DUBLO
Hornby’s first toy trains, powered by a high-quality clockwork motor and ‘O’ gauge in size, were introduced in 1920. Five years later, the first electric Hornby train was produced. In 1938, Hornby Dublo was launched. About half the size of the ‘O’ gauge sets, the new ‘double-O’ range fitted into modest British living rooms more easily. Appealing on many different levels, a set could capture the imagination of a child, as well as tempting an adult to create ever-more complex and intricate layouts. Hornby also realised that although the trains were at the heart of the Dublo world, it was the myriad accessories that really brought it to life. Realistic buildings, scenery and figures combined to create stunningly life-like layouts, which often had to be moved to a converted loft space or garden shed to really fulfil their potential. 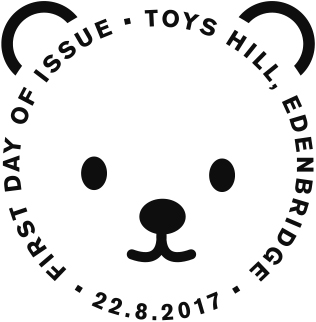 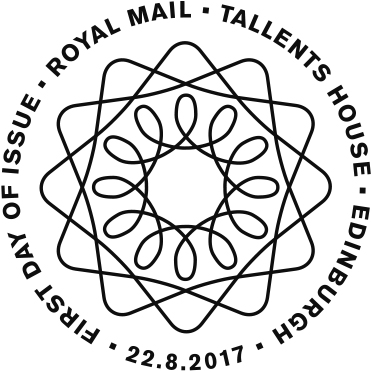