These Special Stamps that pay tribute to some of the world’s most successful racehorse legends.

Known as the ‘Sport of Kings’, it was due to the 17th-century patronage of James I of England (James VI of Scotland) and Charles I that Newmarket in Suffolk developed into the home of organised horse racing.

It was during the reign of Charles II, who founded a series of races at Newmarket and who himself rode winners there in the 1660s, that the sport began to be established.

His enthusiasm led to powerful stallions being imported from the East – notably the Byerley Turk, Darley Arabian and Godolphin Arabian, who arrived in Britain in the late 17th and early 18th centuries – which resulted in all of the UK’s thoroughbred racehorses today deriving from the offspring of these three founding sires.

Royal Mail commissioned the artwork by renowned equestrian artist, Michael Heslop. The paintings depict each horse in action in one of its legendary UK wins.

British horse racing journalist, presenter, and former jockey, Brough Scott said: “British Racing has been going on for almost as long as the Royal Mail and it is great for it to be recognised in this way.”

Artist, Michael Heslop said: “I started painting race horses a long, long time ago. The reason I wanted to paint race horses is, for an artist they have everything; you paint form, you can paint movement. In that one image you’ve got horseflesh and you’ve got the silks of the jockey. Everything in that one image, that is really, really, worth painting.”

Royal Mail, Stamp Strategy Manager, Philip Parker, said: “Horseracing is a British passion, and we pay tribute to eight legendary horses that have proven their greatness on UK race courses and won the affection of the public.” 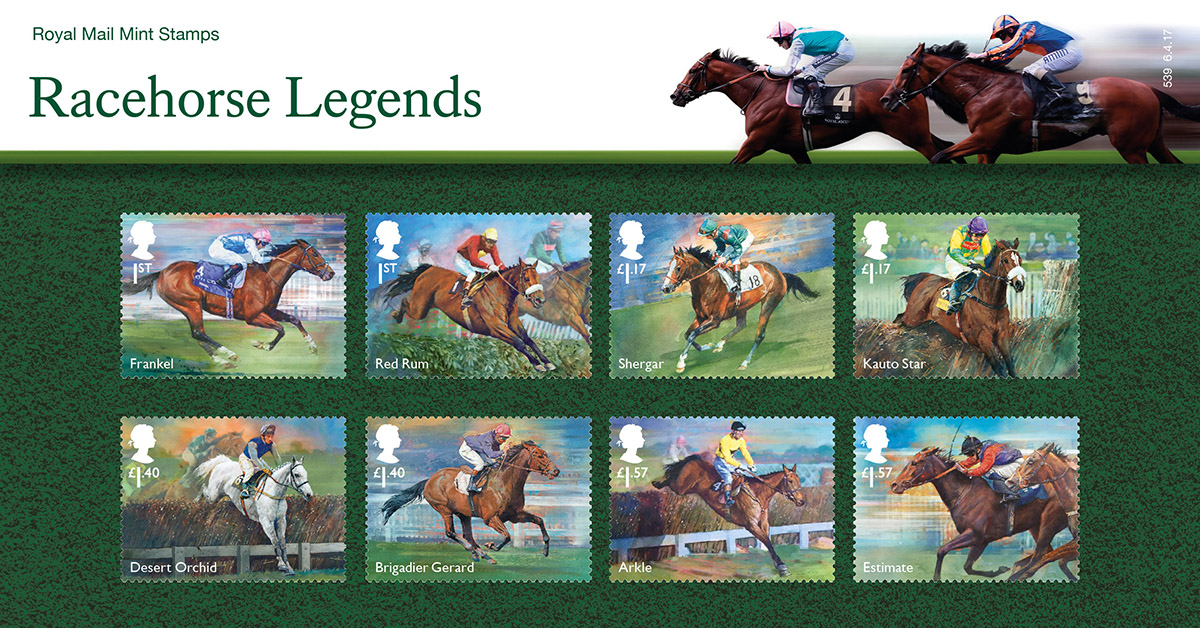 Frankel with his stamp: 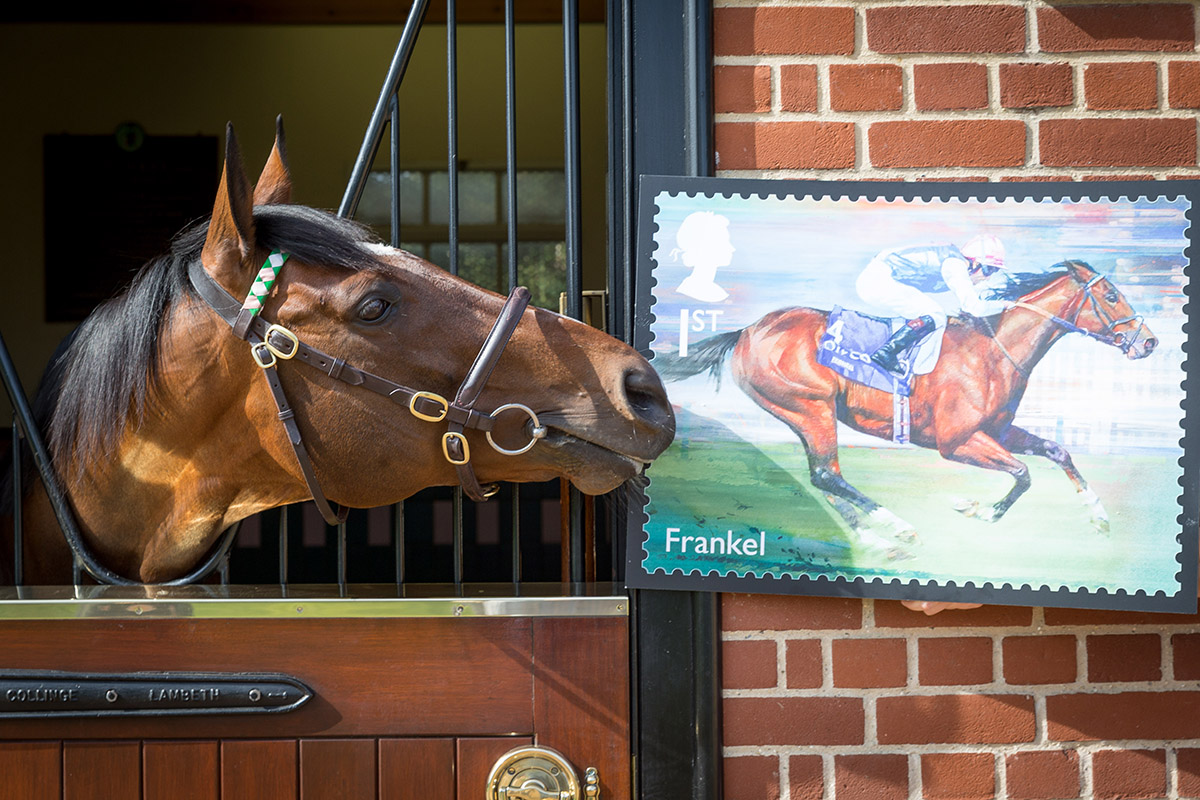 Frankel (b.2008) 2000 Guineas 2011
Frankel was the ultimate racehorse: in 14 flat races over three seasons, he was never beaten and rarely challenged. His style was ruthless, stretching long and low to the ground and powering clear of his rivals. When competing in the 2000 Guineas Stakes at Newmarket in April 2011, for example, at halfway he was a full 15 lengths ahead of the field; a year later, in the Queen Anne Stakes at Royal Ascot, he triumphed by an astonishing 11 lengths. Even those with the longest memories could not recall seeing a more brilliant horse. For Sir Henry Cecil, Frankel’s trainer, their collaboration would provide a most fitting end to an illustrious career.

Red Rum (1965-1995) Grand National 1977
Bred at Rossenarra stud in Kells, County Kilkenny, Ireland, Red Rum was the most popular racehorse to have run over Aintree’s challenging Grand National fences. He went on to win the iconic race a total of three times (in 1973, 1974 and 1977) and finish runner-up on both his other attempts (in 1975 and 1976). Trained by former taxi driver Donald ‘Ginger’ McCain, Red Rum received daily exercise on the local sands at Southport beach, which aided an incurable bone disease that had developed in his hooves.

Amid memorable scenes, Red Rum won his third Grand National title aged 12, before going into retirement in 1978. He died in 1995 and is buried next to the Grand National finishing post.

Shergar (1978-1983) Epsom Derby 1981
Bred in County Kildare, Ireland, and trained by Michael Stoute in Newmarket, the summer of 1981 saw the then three-year-old storm clear of the field in five consecutive races, including the Guardian Classic Trial at Sandown Park, the Chester Vase and the Irish Derby at the Curragh. At the Epsom Derby in June, he won by a full 10 lengths, which today remains the furthest winning distance in the race’s long history. After six victories, Shergar’s winning run ended in the St Leger at Doncaster and he was retired to the Aga Khan’s Ballymany Stud in Ireland. After one season at stud, in 1983 he was stolen and never found.

Kauto Star (2000-2015) King George VI Chase 2009
An enduringly excellent steeplechaser of modern times, French-born Kauto Star ran in six consecutive Cheltenham Gold Cups. He won the race for a first time in 2007 and was victorious again in 2009, becoming the first-ever horse to regain this jumping crown after losing it.

In France, Kauto Star was dubbed ‘L’Extraterrestre’ (The Extraterrestrial) and ran 10 times on home turf before he was bought by Clive Smith to be trained by Paul Nicholls at Ditcheat, Somerset. During his career, Kauto Star won 16 Grade 1 steeplechase races, including a record five victories between 2006 and 2011 in the prestigious King George VI Chase at Kempton Park.

Desert Orchid (1979-2006) Cheltenham Gold Cup 1989
Known affectionately as ‘Dessie’, Desert Orchid was a front-running grey adored by the crowds for his incredible jumping, versatility and courage. Trained by David Elsworth, he ran 71 times between January 1983 and December 1991, winning 34 races on ground from firm to heavy and at distances ranging from 2 miles to 3 miles 5 furlongs. A brilliant hurdler, he would become a legendary steeplechaser, winning the King George VI Chase four times, the Cheltenham Gold Cup and the Irish Grand National.

Desert Orchid’s unforgettable victory in the 1989 Cheltenham Gold Cup has often been voted one of the most emotional horse races of all time.

Brigadier Gerard (1968-1989) 2000 Guineas 1971
Owned by John and Jean Hislop, and trained by Dick Hern, Brigadier Gerard won 17 of his 18 races between 1970 and 1972, but it was his decisive victory over My Swallow and Mill Reef in the 2000 Guineas Stakes in May 1971 that perhaps defined his legacy. With about 200 yards to go in the mile-long Classic Race at Newmarket, an intense burst of speed propelled Brigadier Gerard past the two leaders and he maintained his lead until the finish line.

Other highlights of the Brigadier’s career include an impressive 10-length margin of victory in the Goodwood Mile and a win by eight lengths in the Queen Elizabeth Stakes at Ascot, both in 1971.

Arkle (1957-1970) Cheltenham Gold Cup 1964
Born at the Ballymacoll Stud in Ireland in 1957, Arkle has been described as the greatest steeplechaser of the 20th century. With his prodigious power and fluent jumping, he raced over various distances, ranging from 1 mile 6 furlongs up to 3 miles 5 furlongs, and won 27 of 35 races.

On home turf, Arkle triumphed in the Irish Grand National at Fairyhouse in 1964 and he won the Leopardstown Chase each year between 1964 and 1966, but it was his astonishing performances in Britain, including consecutive victories in the Cheltenham Gold Cup (1964, 1965 and 1966) and the Hennessy Gold Cup at Newbury (1964 and 1965), which elevated Arkle to legendary status.

Estimate (b.2009) Ascot Gold Cup 2013
Over the last six decades, Her Majesty The Queen’s thoroughbreds have had great success at Ascot, with victories in more than 70 races. Fittingly, in the year in which the 60th anniversary of The Queen’s Coronation was celebrated, Her Majesty would become the first reigning monarch to triumph in the Gold Cup at Royal Ascot, when her mare Estimate won the coveted event in June 2013.

Bred at the Gilltown Stud near Kilcullen, Ireland, as a three-year-old, Estimate had earlier enjoyed a five-length victory in the Queen’s Vase at Royal Ascot in June 2012. The last of her five wins came in September 2014, in the long-established Doncaster Cup, before she was retired to the Royal Stud. 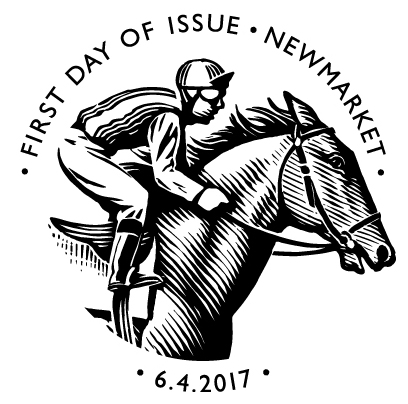 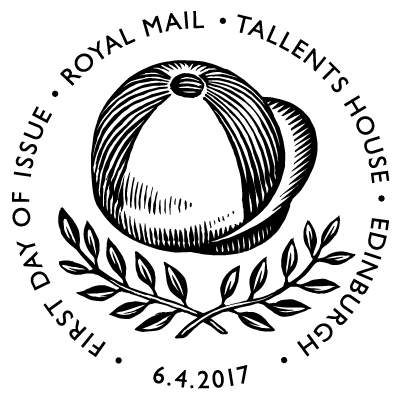