These stamps mark the 400th anniversary of the death of William Shakespeare, one of the most published authors and most performed dramatists of all time.

The ten First Class stamps pay tribute to the genius of Shakespeare through his immortal words and poetry.

From Tuesday 5 April until Saturday 9 April, a special postmark was applied to UK stamped mail commemorating 400 years since the Bard’s death. It said William Shakespeare 1564-1616.

Having previously issued stamps that depict performances of his plays, a painting of the bard himself and the world famous Globe Theatre, this set focuses on the power of Shakespeare’s words, and selected poignant lines from his plays and poems.

Shakespeare’s plays have been constantly re-interpreted and performed and he is arguably the most influential writer of all time: even those who have never read or seen one of his plays will be familiar with a host of the 1,700 words and phrases he introduced into the English language, including ‘assassination’ first used in Macbeth and ‘all’s well that ends well' from the play of the same name.

Over 50 years, William Shakespeare and his work have appeared on 25 stamps making him the most featured individual on Special Stamps outside of the Royal Family.

Born in April 1564 in Stratford-upon-Avon, William Shakespeare was an actor, poet and playwright, as well as a canny businessman.

He died on 23 April 1616, leaving what is accepted as 37 plays (18 were published during his lifetime), some 154 sonnets and at least three long poetic works, all of which have inspired the world for four centuries.

After Shakespeare’s death, two of his actor friends, John Heminges and Henry Condell, collected 36 of his plays - Pericles, Prince of Tyre was not included due to doubts as to its authorship.

The plays were published in what is now known as the ‘First Folio’. Without the efforts of Heminges and Condell, some of Shakespeare’s greatest plays would have been lost forever.

Philip Parker, Stamp Strategy Manager, Royal Mail, said: “It is fitting that Shakespeare is being honoured with a set of stamps to mark the 400th anniversary of his death. The stamps celebrate the power of his language, which continues to influence us every day.”

Sources of quotations on stamp images: 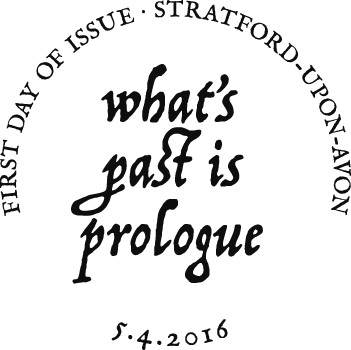