Special Stamps featuring beautiful depictions of songbirds that fill the British countryside with song that defines the British spring and early summer.

Songbirds, a set of Special Stamps featuring beautiful depictions of songbirds that fill the British countryside with song that defines the British spring and early summer.

Birds communicate in sound for various reasons; their calls warn of danger and can keep the flock together. Birdsong however, has a far more complex reason, often conveying a powerful message about the individual singer.

A singing male bird uses birdsong to communicate how fabulous he is to attract a female and provide a warning to other males that the territory is taken.

There are some birds that sing the same song over and over again, hundreds of times a day. Other species have complex repertoires and songs that are more changeable and more personal.

Individual males with the best repertoires advertise themselves as the most attractive and most fearsome.

The glories of the British spring require ears as well as eyes and the best time to listen to birdsong is at dawn when sounds carry better at first light.

Birdsong also enables us to find out what’s going on among the birds as it allows us to count the singers and their territories.

Royal Mail spokesperson, Philip Parker, said: “These exquisite stamps are a timely reminder of the wealth of birdsong to be enjoyed at this time of year.”

Royal Mail worked with journalist and author, Simon Barnes on the stamp issue. Simon has written a number of books on birds and bird watching. 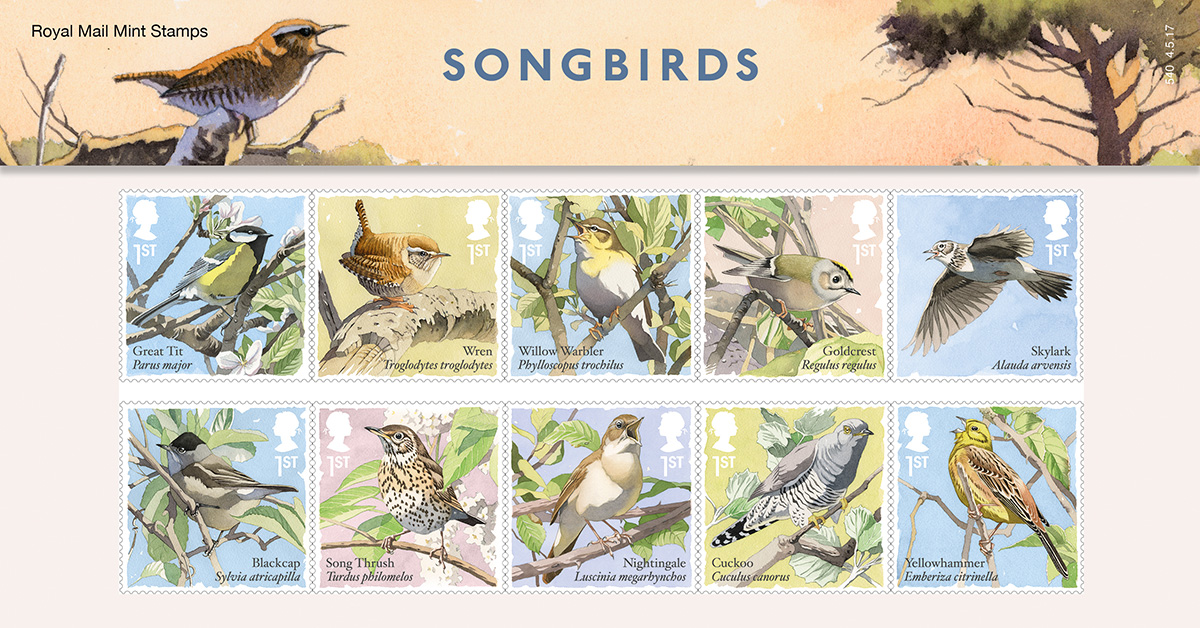 Great Tit / Parus major
Great tits are among the first birds to welcome the spring, and they do so with varied songs that are strident, vigorous, monotonous and unmistakable. The most common consists of loud, much-repeated syllables often transcribed as ‘teacher-teacher-teacher’; it has also been compared to the sound of a squeaky pump in action. Great tits like mature trees, parks and gardens and thrive in suburbia. They are bold birds, their yellow bellies divided by a black stripe. This is a bird that draws attention to itself.

Status: Increasing
Wintering grounds: Resident in the UK year round

Wren / Troglodytes troglodytes
If you hear a song of astonishing volume from round about knee-high, chances are that it’s a wren. It seems barely possible for so small a creature to make such a din. The song is hard and dry and rattly, and it is usually marked by a prolonged trill at the end, although when a recording of it is slowed down, it becomes curiously melodic. Wrens like scrub and cover close to the ground. When they come briefly into sight, their cocked tail is a visual signature.

Status: Increasing, especially in Scotland
Wintering grounds: Mostly resident in the UK, but some birds migrate to Continental Europe

Willow Warbler / Phylloscopus trochilus
The first willow warbler tends to announce the arrival of the high spring. The warming-up is over: now for the real thing. These birds fly in from western Africa to spend the summer with us – a prodigious journey for such a small bird. The song is a soft, lisping descent down the scale, much repeated with subtle variations. These are birds of scrubby unkempt countryside rather than thick woods, and they mostly prefer places a little wilder than towns or the intensive agricultural countryside.

Goldcrest / Regulus regulus
These are Britain’s smallest birds, and they have a thin little song to match. It’s most often heard from the top of a conifer tree: a pretty trickle of golden notes that you could easily overlook. The notes are very high; as birders grow old, they often lose the ability to hear goldcrests. But a still day under a stand of conifers in the spring is very likely to bring you a snatch of that pretty song, and a sighting of the bird, with its flaming headdress, is always cheering.

Skylark / Alauda arvensis
Skylarks are essentially ground birds that make their living from open spaces of grass, heath and arable fields, often remaining inconspicuous. It’s only when the spell of spring is upon them that they take to the air for a sustained period, and up they go – as if being wound up on an invisible string. They are still widely distributed throughout the UK, but the steep decline in their numbers is one of the many worrying problems of the 21st-century countryside.

Blackcap / Sylvia atricapilla
Here is a song of prolonged grace and tunefulness. Blackcaps have often been claimed as Britain’s champion songsters, subtler and more melodic than nightingales. They also travel much farther north than nightingales. Their song is fruity and fluty but mixes in more challenging notes and phrases. They like to sing from cover and are not often seen, but their song is familiar in mature gardens and parks across the country as well as in wilder places – they are secret superstars.

Status: Increasing
Wintering grounds: Most British birds winter in southern Europe and northern Africa, but increasing numbers of birds from Germany and northeastern Europe winter in the UK

Song Thrush / Turdus philomelos
Song thrushes are mad about repetition. They take a phrase, run through it two or three times, then come up with another and repeat that. They like to do so from a high, often exposed perch: the top of a mature tree is best, but even a lamp post will do. They swing into action early in the year, on fine days in February, and can be heard anywhere with trees and open spaces, which makes parks and gardens as natural for them as woodland edges. They sing on into July.

Status: Declining steeply
Wintering grounds: British birds winter mostly at home, but some fly to northern France, Spain or Portugal, and some from the Low Countries migrate to Britain for the winter

Nightingale / Luscinia megarhynchos
Nightingales don’t just sing at night; they also sing all day. It’s the most strenuous option taken up by any songbird. And what a song: louder than you’d believe possible, a crescendo of whistles, a deep throbbing drumming, strange radiophonic sounds and snatches of pure melody. Nightingales sing from deep cover, so don’t bother trying to see one: revel in that impossible song, loudest from late April to mid-May. A nightingale comes to many as a revelation of life’s unimagined possibilities.

Cuckoo / Cuculus canorus
The two-syllable song was once known to everyone in the country but is now a comparative rarity. Yet in the right places – often low-lying and damp – the cuckoos arrive for a six-week frenzy of sound, from late April to the beginning of June. Cuckoos are famous for laying their eggs in other birds’ nests, so the one essential of this lifestyle is for males to get into contact with females. They need an uncomplicated song that carries for miles.

Yellowhammer / Emberiza citrinella
The yellowhammer’s song was once the song of traditional farmland: this is a hedge-loving bird singing a much-repeated phrase that is traditionally written as ‘a little bit of bread and no cheese’, although it’s more like ‘bread-bread-bread-bread cheeeeeese’. Changes in farming practices have led to these birds’ decline, but they can still be heard in places where the hedges and the food supply are right. The male, when caught in a good light, stands out with a blazing yellow head. 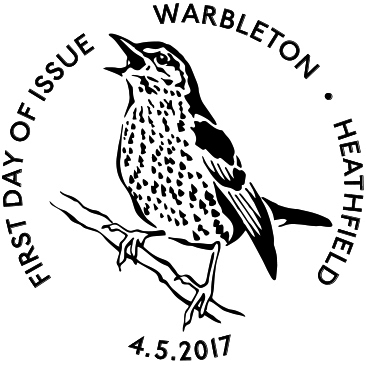 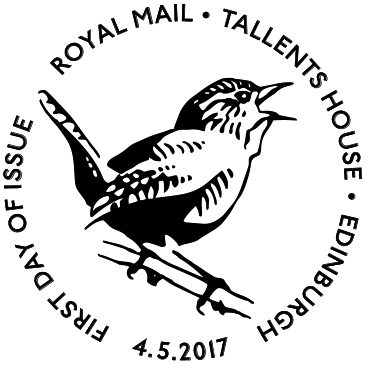