These stamps are the third set of a five-year commemorative programme marking the events of the First World War.

The stamp images provide a wide-ranging and inclusive commemoration and illustrate:

The imagery on the stamps features historic memorials and artefacts that have become synonymous with the conflict, portraits of some of the participants, art showing some now famous and moving scenes, poems composed during the war and newly-commissioned artworks of poppies – the symbol of Remembrance.

These themes combine to form a beautiful and poignant collection which serves as a fitting way to mark this tragic conflict. Not only did the First World War claim millions of lives, it changed the course of history and transformed the lives of generations to come.

Minister for First World War Commemorations David Evennett said: "The Royal Mail stamps are a poignant tribute to the many lives lost and affected by the First World War.

“The Battle of the Somme and Jutland commemorations are important milestones in the First World War centenary and I hope that these stamps encourage people to remember and learn more about the pivotal events of 1916."

Philip Parker, Royal Mail, commented: “A century ago our armed forces were making the ultimate sacrifice on land and at sea, and non-combatants were making an extraordinary contribution overseas and on the home front. Our stamp issue pays tribute to all.” 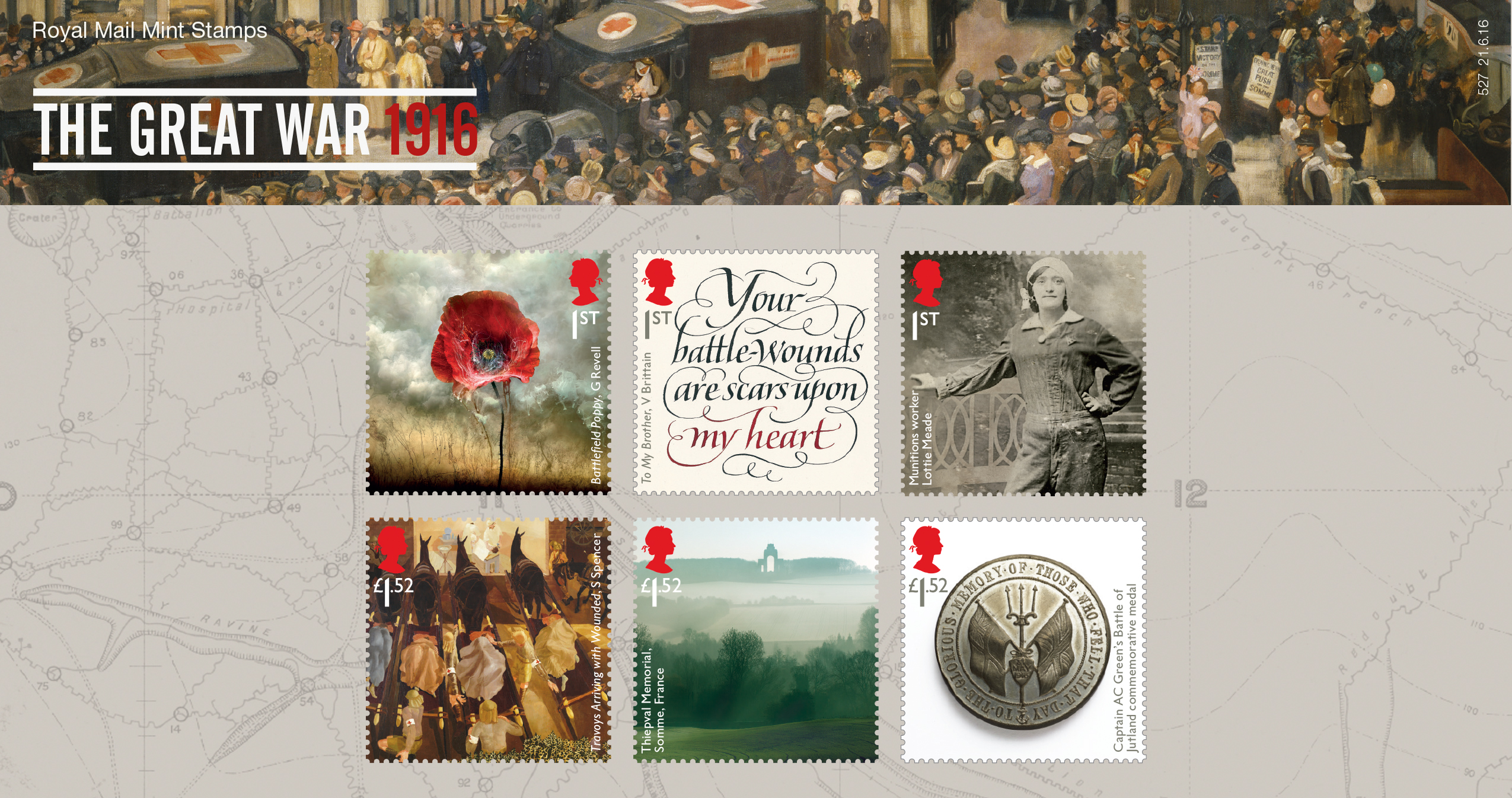 To represent the Poppy – the symbol of remembrance - is The Battlefield Poppy. Depicting a single poppy against a chaotic and barren background, the image has an ethereal quality, suggesting the alienation of life from a world of violence and suffering. To create this delicate and atmospheric image, photographer Giles Revell, suspended real poppies in a water tank and added coloured dyes to create swirling mist-like patterns. The result, after much painstaking experimentation, is a painterly effect that captures the solitary poppy’s fragility and vulnerability.

‘To My Brother’, Vera Brittain

The written word is depicted with a line from the poem ‘To My Brother’ by Vera Britten. Vera was born in 1893 in Staffordshire. At the outbreak of the war, her younger brother Edward applied for a commission, and in 1915 Vera trained as a nurse. In June 1918, she wrote ‘To My Brother’, a poem commemorating Edward’s bravery on the Somme two years previously, in which she addressed her brother with the following words: “May you endure to lead the last advance”. Four days later, Edward was killed. Vera was devastated by his death. After she died in 1970, her ashes were scattered on his grave, according to her wishes. By then, her writings had made her a major figure in the literary history of the war.

The role of women and non-combatants in the war is illustrated by a studio portrait of Charlotte ‘Lottie’ Meade. Reflecting her work as a munitions worker, Meade is posing in her overalls, her hair covered by a headscarf. On her overalls, she wears a small triangular brooch, an ‘On War Service’ badge that marks her as playing her part in the war effort. During the war, millions of women entered Britain’s workforce, while many others left work such as textile manufacturing and domestic service in favour of higher-paying war work. Employment in the munitions industry could be hazardous. Meade herself would die of TNT poisoning on 11 October 1916, leaving a husband and four young children.

Travoys arriving with wounded at a dressing-station at Smol, Macedonia, September 1916, Stanley Spencer

Artist Stanley Spencer was inspired by an incident he witnessed in September 1916 which in turn became this piece of artwork. During the time he was serving with a field ambulance unit in Macedonia, a stream of wounded soldiers was brought to Spencer’s dressing station, which was housed in a Greek church. As a Christian, Spencer saw this scene in religious terms; the suffering of the wounded reminded him of Christ’s crucifixion, while the life-saving work of the surgeons made him think of the Resurrection.

The memorial stamp for 2016 marks the Battle of the Somme. The battle, which commenced on 1 July 1916, is remembered as an offensive that has gone down in history as symbolic of the sacrifice of the war. Almost 20,000 soldiers were killed on the first day – the bloodiest day in the history of the British army. The village of Thiepval was a key strategic point on the Somme battlefield. Fought over many times, it was finally captured by British troops in late September 1916. Thiepval was later selected as the site of the Thiepval Memorial, designed by Sir Edwin Lutyens. The arches symbolise the unity of Britain and France. The memorial’s inner faces bear the names of 72,253 British and South African troops who died on the Somme and who have no known grave. Rising up to 160 feet (48m), the memorial now stands over a peaceful agricultural landscape, dotted with British and imperial cemeteries and memorials. Sited at the foot of the memorial is a small cemetery that contains equal numbers of Commonwealth and French graves.

The image of the artefact marks the centenary of another battle – that of The Battle of Jutland - a major naval battle of the War, fought in the North Sea on 31 May and 1 June 1916. After Jutland, unofficial medals were struck to commemorate the battle. Designed by Prince Louis of Battenberg, a former First Sea Lord, these medals were made by Spink and Son of London and sold in gold, silver, bronze and white metal versions to raise money for naval orphanages. The design features a trident, a symbol of naval power. Crossed flagstaffs bear a Union flag and the Royal Navy’s White Ensign, and a shield carries the date of the battle: 31 May 1916. This particular example belonged to Captain AC Green of the Royal Marines.

The Post Office Rifles originated in the 1860s as a volunteer rifle corps. By the outbreak of the First World War, the regiment was organised as 8th Battalion, London Regiment. Two more battalions were raised during the war, and 12,000 men served in them; 1,800 of them were killed and 4,500 wounded. The Rifles took part in many battles, including Loos, the Somme, Passchendaele and Amiens. Its members received 145 gallantry awards. This included four Victoria Crosses, which were awarded to Sergeant Alfred Knight; and GPO staff Sgt Albert Gill; Major Henry Kelly; and Sgt John Hogan.

Delivering the mail on the Home Front

Whether delivering call-up letters that conscripted men into military service, carrying vital correspondence that organised war production or distributing ration books, the postal service was an essential part of Britain’s war effort. During the war, the Post Office released 75,000 men for military service and took on thousands of temporary staff, many of them women, in their place. The war took its toll. Many areas saw reduced deliveries, and the Government’s need to raise revenue meant the end of the famous Penny Post rate in June 1918.

A reliable postal service was vital to keeping up the morale of Britain’s soldiers and sailors. In December 1914, to handle the volume of military mail, the General Post Office built a vast sorting office in Regent’s Park, London. Covering five acres (2ha) and employing 2,500 staff, most of them female, the Home Depot received and dispatched staggering quantities of material. During 1917, 19,000 mail bags were crossing the English Channel every day, with half a million making the journey in the run-up to Christmas. At its peak, the Home Depot was handling up to 12 million letters and a million parcels every week.

Writing a letter from the Western Front

With only rare opportunities for home leave, letters were an essential link between servicemen and their loved ones at home. Higher standards of literacy, compared to previous generations, meant that most soldiers could read and write. Often written in pencil, on whatever paper could be found, letters gave soldiers an opportunity to imagine themselves in conversation with loved ones back home. Around two billion letters went to and from servicemen during the war. A century later, those letters surviving in archives, libraries and private collections provide fascinating insights into individuals’ experiences of the war. 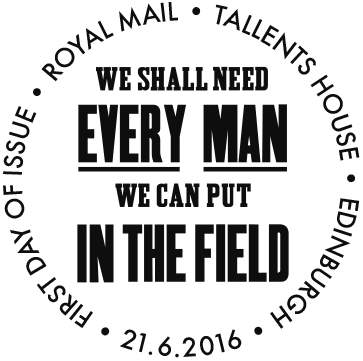 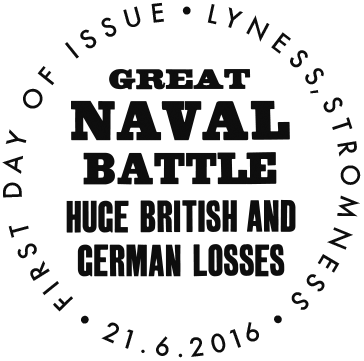