Our five-year commemoration of the First World War has now reached 1917, which saw the US enter the conflict, new challenges at sea and the will of our soldiers being tested like never before.

These stamps are the fourth set of a five-year commemorative programme marking the events of the First World War.

Across the series, the stamp images have provided a wide-ranging and inclusive commemoration and illustrate:
- How artists, including writers and painters, interpreted the events
- The role of non-combatants and civilians
- The role of the Services
- The role of women
- The contribution of the Commonwealth

The imagery on the stamps features historic memorials and artefacts that have become synonymous with the conflict, portraits of some of the participants, art showing some now famous and moving scenes, poems composed during the war and newly-commissioned artworks of poppies – the symbol of Remembrance.

These themes combine to form a beautiful and poignant collection which serves as a fitting way to mark this tragic conflict.

Shattered Poppy is by photographer John Ross. Using a microscope in his work, Ross manages to reveal aspects of subjects not normally visible.

An extract from the poem, ‘Dead Man’s Dump’, by British painter and poet, Isaac Rosenberg also features. The poem graphically depicts the horrors of the war. Rosenberg himself died on 1 April 1918, during the German spring offensive.

Also included in the set is an image of nurses Elsie Knocker and Mairi Chisholm who travelled to Belgium to join a small ambulance corps where they worked transporting casualties to base hospital. They established a front-line first-aid post at Pervyse in Belgium where they would eventually treat 23,000 casualties. In 1917 they were awarded the Military Medal.

Also featured is an image of a war ship with its hull painted in a geometric, abstract style. The design was created by British painter Edward Wadsworth, who was engaged to create ‘dazzle camouflage’ patterns for British ships, which were intended to confuse attacking German U-boats.

To mark the 100th anniversary of the battle of Passchendaele, which commenced on 31 July 1917, a stamp features an image of the Tyne Cot Cemetery in Belgium, where fallen soldiers from the battle were buried. Designed by Sir Herbert Baker, a total of 11,961 Commonwealth servicemen of the First World War are buried or commemorated there.

Private Lemuel Thomas Rees’ life-saving Bible was specially photographed for the stamp issue. During the Battle of Passchendaele, an exploding German shell landed close by, and although Rees was hit, he was saved by the small Bible that he kept in his breast pocket. Rees was conscripted into the 6th Battalion in 1917.

Philip Parker, Royal Mail, commented: “The First World War claimed millions of lives, changed the course of history and transformed the futures of the generations that followed. We are proud to present the fourth part of our commemorative programme marking the contribution and sacrifice of those who took part.” 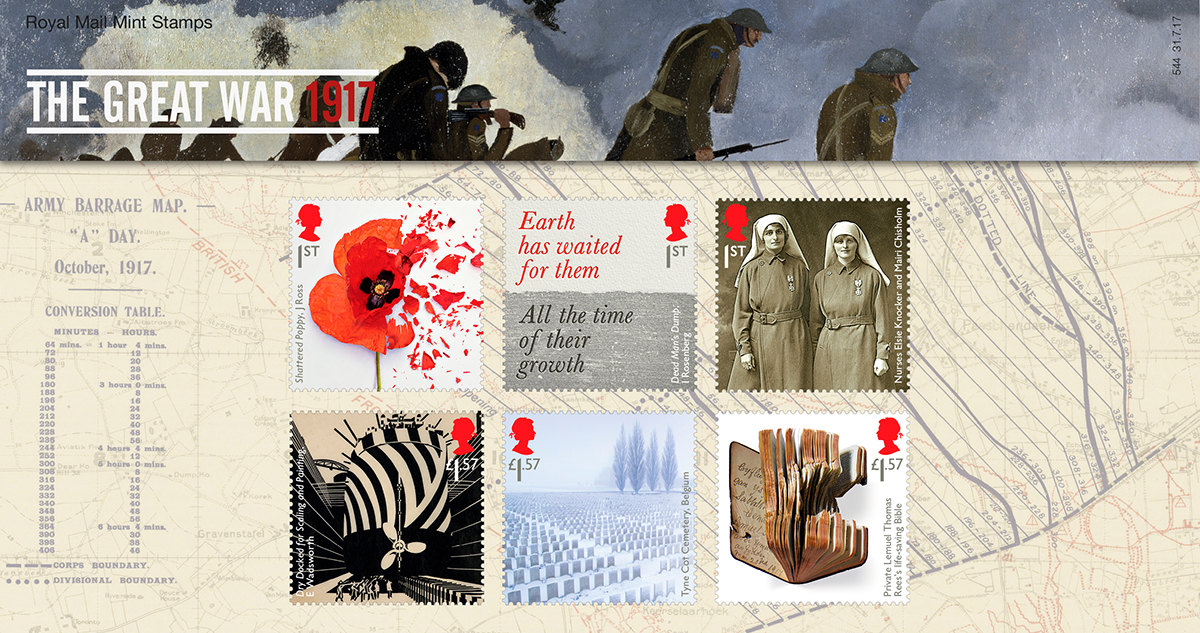 SHATTERED POPPY
To create Shattered Poppy, photographer, John Ross, needed a supply of fresh poppies and so he set up a temporary studio in a barn next to a poppy field, where he froze freshly cut poppies using a vat of liquid nitrogen, before breaking the brittle petals with a metal rod. Backlit to maximise the flower’s colour and fine structure, the resulting image suggests a sudden, devastating act of violence, an impression that is heightened by the poppy’s natural delicacy.

‘DEAD MAN’S DUMP’, ISAAC ROSENBERG
Isaac Rosenberg was a British painter and poet. The son of Lithuanian Jewish immigrants, he studied at the Slade School of Fine Art in London, but also maintained an interest in writing poetry. By the time of his arrival on the Western Front with the 11th Battalion, King’s Own (Royal Lancaster Regiment) in the summer of 1916, he had published three volumes of poetry. In ‘Dead Man’s Dump’, Rosenberg depicts a shocking scene as mule-drawn wagons laden with coils of barbed wire pass by the dying and crush the bodies of dead men lying in their path.

NURSES ELSIE KNOCKER AND MAIRI CHISHOLM
Shortly after the outbreak of war, friends Elsie Knocker and Mairi Chisholm travelled to Belgium, joining a small ambulance corps where they worked transporting casualties to base hospitals. Realising that many men were dying from untreated wounds, they established a front-line first-aid post at Pervyse in Belgium where they would eventually treat 23,000 casualties. In 1917 they were awarded the Military Medal. The stamp image shows the ‘Madonnas of Pervyse’ wearing the Order of Leopold II, a Belgian decoration that they received in 1915. In 1918 both nurses were affected by a gas attack. Chisholm recovered sufficiently to return to the front.

DRY DOCKED FOR SCALING AND PAINTING, EDWARD WADSWORTH
Working in the geometric, abstracted style of Vorticism, British painter Edward Wadsworth was interested in technology and the new perspectives it might offer. After being invalided out of the Royal Naval Volunteer Reserve in 1917, he was engaged to design ‘dazzle camouflage’ patterns for British ships, which were intended to confuse attacking German U-boats (submarines). In Dry Docked for Scaling and Painting, Wadsworth emphasises the harsh, confusing geometry of the new patterns, as the massive hull of the merchant ship seems to disappear among its new stripes.

TYNE COT CEMETERY, BELGIUM
Tyne Cot Cemetery in Flanders, Belgium, was designed by Sir Herbert Baker. A total of 11,961 Commonwealth servicemen of the First World War are buried or commemorated there. Of the burials, 8,373 are unidentified. Visiting the cemetery in 1922, King George V remarked: “I have many times asked myself whether there can be more potent advocates of peace upon Earth through the years to come than this massed multitude of silent witnesses to the desolation of war.” On the Tyne Cot Memorial are the names of almost 35,000 UK and New Zealand servicemen who were killed in the Ypres Salient after 16 August 1917 and who have no known grave.

PRIVATE LEMUEL THOMAS REES’S LIFE-SAVING BIBLE
In 1917, Lemuel Thomas Rees was conscripted into the 6th Battalion, South Wales Borderers. During the Battle of Passchendaele, an exploding German shell landed close by, and although Rees was hit, he was saved by a small Bible that he kept in his breast pocket. After spending four months in a field hospital, he was sent home on leave where he suffered terrible nightmares, reliving the horrors of trench warfare.  Following his return to the Western Front, Rees was wounded in a gas attack. He died from bronchial pneumonia and the effects of gas on 13 November 1918, only two days after the Armistice was signed. 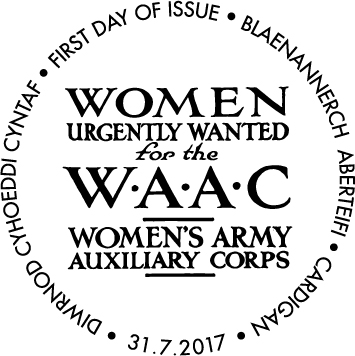