The Great Fire of London

Stamp name: Sunday 2 September 1666 – A fire breaks out in a bakery on Pudding Lane

A fire breaks out in a bakery on Pudding Lane. Thomas Farriner, the baker, and his daughter escape through a window

These Special Stamps mark the 350th anniversary of the start of the Great Fire of London.

The six stamps depict key scenes documenting the start, spread and aftermath of the Great Fire of London, which raged across the city from 2 to 5 September 1666.

It is the first time Royal Mail has used a graphic-novel style of design on its stamps, which were created by renowned comic book artist and writer, John Higgins. The graphic style uses a street map design to locate the action.

A prominent and respected artist of the comic book scene, Higgins has worked on iconic titles such as Judge Dredd, 2000 AD and Watchmen series.

Philip Parker, Royal Mail, said: “The Great Fire of London is one of the most infamous events in the history of London. Despite the terrible devastation caused by the Great Fire, it provided the opportunity for the regeneration of large swathes of the city and shaped the London we know today. It was the catalyst of the building of iconic landmarks such as St Paul’s Cathedral and dozens of parish churches. It is fitting that we mark the anniversary of the fire with an innovative set of stamps that reimagine the events.”

John Higgins, artist, said: “It is an honour to illustrate these stamps and to commemorate this moment in history 350 years on. Capturing the story of the Great Fire of London in just six Special Stamps was a wonderful challenge, I am thrilled to have been chosen to bring the graphic-novel style to Royal Mail’s Special Stamps for the first time.”

Meriel Jeater, curator of the Fire! Fire! exhibition currently on at the Museum of London, said: “Fire! Fire! at the Museum of London takes visitors on a theatrical journey through the events of the Great Fire step by step, much like these commemorative stamps will on a smaller scale. The graphic novel design brings the fire to life in a new way and is a great way to commemorate this pivotal moment in our history.” 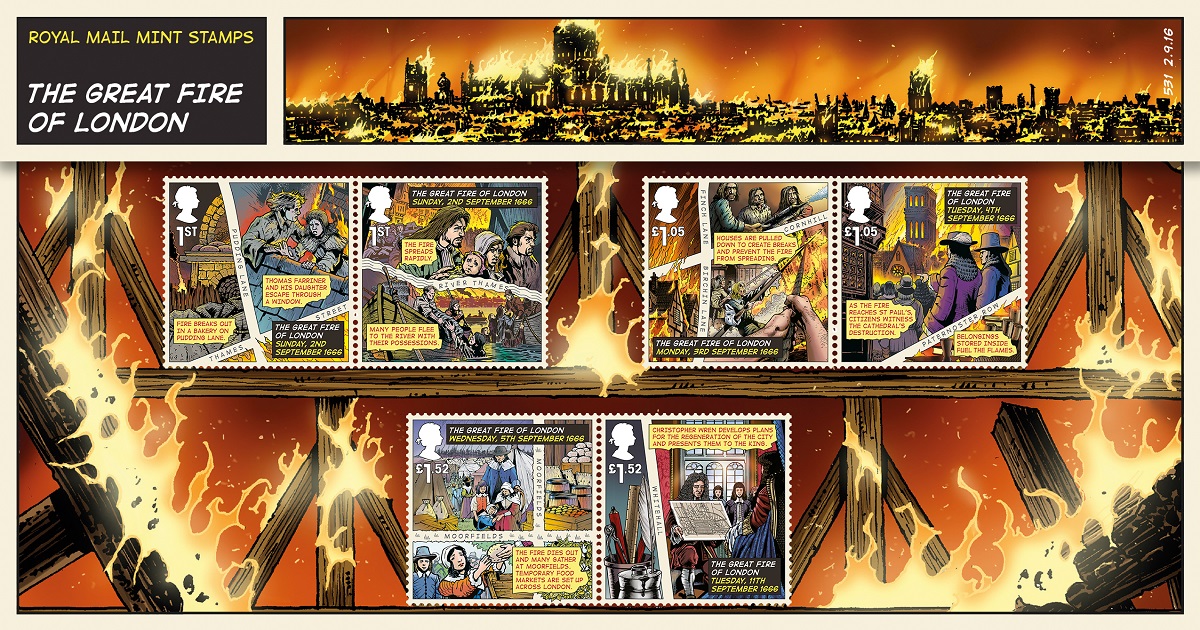 The fire broke out in a bakery in Pudding Lane in the early hours of the morning of Sunday, 2 September 1666.

Burning over four days, it left a trail of devastation: more than 13,000 houses burned down; 87 churches and 52 livery company halls were destroyed; and many iconic buildings, including St Paul’s Cathedral and the Guildhall, were ruined.

The dry hot summer of 1666 had left the city’s many wooden buildings tinder dry, providing the perfect fuel for the fire; its destructive progress was also aided by a strong easterly wind.

The city’s narrow streets and the close proximity of so many of the buildings enabled the blaze to sweep through the area.

As the fire burned, naval administrator Samuel Pepys recorded the events in his diary. Pepys’ first-hand account would become a vital historical document in piecing together what happened.

Leading by example, King Charles II and his brother, the Duke of York, remained in London to offer support to their citizens. King Charles II ordered that houses be pulled down in order to stop the spread of the fire.

Many people fled to parts of London that were unaffected by the fire, but others remained to help with the firefighting effort, using fire hooks to pull down buildings to create fire breaks, and fire squirts and buckets to extinguish the flames.

In addition to the destruction of the city, the fire had significant human impact with thousands of people made homeless and an estimated 10 people losing their lives.

Within days of the fire, Sir Christopher Wren presented to the King his plans for the regeneration of the city. Wren would go on to design the new St Paul’s Cathedral and the Monument, close to where the fire began on Pudding Lane. 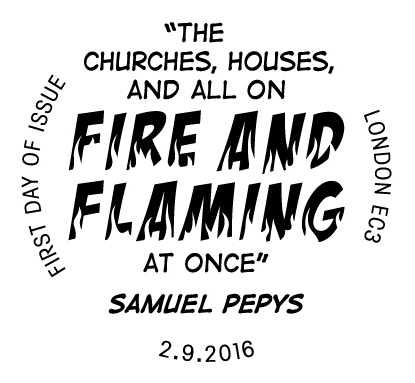 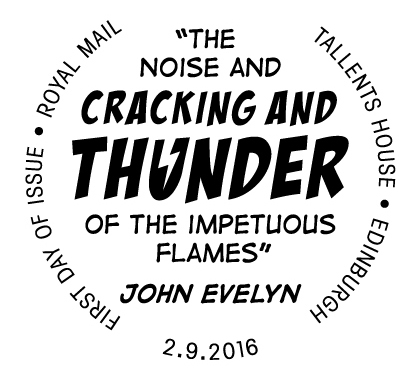