One of the many preliminary sketches by Arnold Machin based on the Penny Black.

These stamps celebrate the 50th anniversary of the iconic Machin Definitive stamp, first issued on the 5 June 1967.

The Machin Definitive is the official name for the regular stamps we use and is named after the man who created it, Arnold Machin.

Coming from a family of pottery workers, at the age of 14 Machin started working at the Minton China Factory, where he stayed for seven years.

A talented sculptor and modeller, he won scholarships to both the Derby School of Art and Royal College of Art.

Machin Definitive
Prior to 1967, an image of The Queen taken by society photographer Dorothy Wilding was used on stamps. Following a decision to refresh the Wilding image, a number of artists were invited to submit their ideas to Royal Mail.

All had to submit a portrait ‘rendering’ of The Queen and some sample stamp designs. Machin based his initial ideas on work he had previously done for his portrait of The Queen for the decimal coinage, which was based on photographs taken by Lord Snowdon.

Machin produced six portraits and created a total of nearly 70 sketches, far more than anyone else. Several of these greatly resembled the Penny Black, the world’s first adhesive stamp. Some had elaborate frames, and many gave the appearance of a cameo, reflecting Machin’s previous work for Wedgwood.

Nearly all featured The Queen wearing a tiara, as in the Snowdon photographs and on Machin’s effigy for coins.

Machin was asked to develop his ideas, which as a sculptor he did in the form of a plaster cast.

A recording of the design process was filmed by the then General Post Office (GPO) for the film, Picture to Post. The film featured Machin as he worked on creating a profile of The Queen as a bas-relief cast.

The bas-relief cast was then photographed and used as the image that appeared on the new stamp.

Royal Mail’s design classic was first issued at the 4d value on 5 June 1967.

Since it was first issued, the portrait has been reprinted an estimated 220 billion times, in more than 130 different colours, and is considered to be one of the most reproduced images in the world.

The colours of the Machin stamps have always been specially selected to show off the sculpture to best effect.

The current colours are from the ‘Jubilee Colour Palette’ that was introduced in 2013.

In the 50 years since the introduction of the Machin design for definitives, a remarkable number of different stamps have been produced. There have been more than 550 basic varieties; the differences being mainly in value, colour, shape, security features, phosphor bands or coating, methods of printing and printers.

Dominic Newton, Arnold Machin’s nephew and Director and Trustee of the Machin Arts Foundation, said: “Arnold Machin regarded his design and sculpture for the definitive issue stamp as his greatest achievement. He saw his task as creating a design with charm and dignity and yet without sentimentality, both a likeness of The Queen and an image of the monarchy. The result was an iconic design that has stood the test of time.”

Royal Mail spokesperson Philip Parker said: “We are proud to mark the golden anniversary of the Machin Definitive with new stamps showing the evolution of this design classic.” 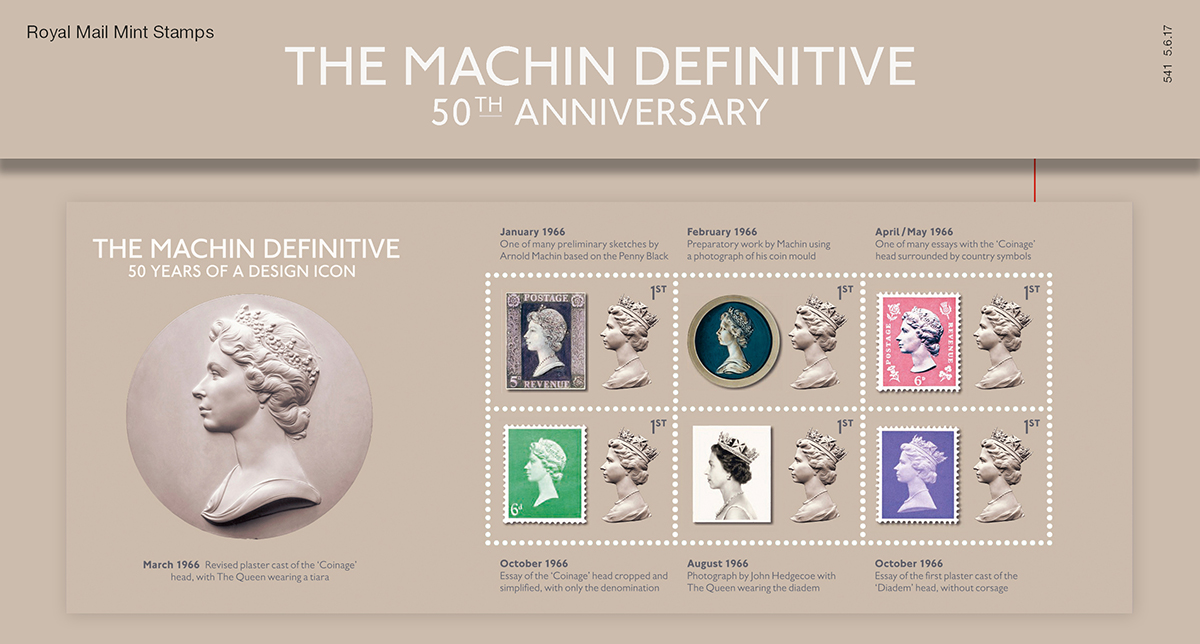 The new stamps feature important stages in the evolution of this iconic design:

February 1966 – Work by Machin on the mould devised for the coinage head.

April/May 1966 – An essay (or proof) of the coinage head with symbols.

August 1966 – John Hedgecoe’s photograph was then used by Machin to model the diadem worn by The Queen (and which was worn by Queen Victoria on the Penny Black).

October 1966 – plaster cast with the diadem but without corsage, which was the final design element, as seen on the final image. 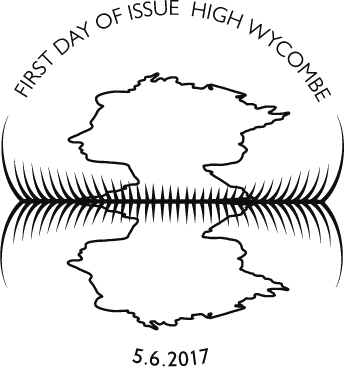 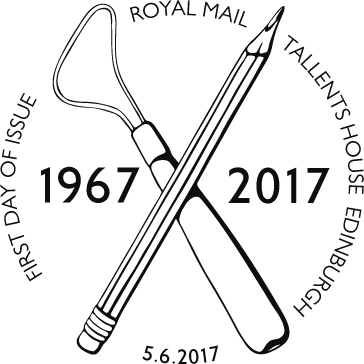