This special stamp issue celebrates the Windmills and Watermills of the UK.

As a tribute to these iconic and endearing structures, the six-stamp set features three windmills and three watermills from around the UK.

Windmills were first referred to in east and south-east England in records dating from the 12th century, and had become widespread throughout Britain by the end of the 13th century.

Some of the UK’s surviving windmills and watermills are over 400 years old and many are still in working order.

A windmill is defined as a machine that converts the energy of wind into rotational energy by means of vanes called sails or blades.

Originally developed for milling grain for food production, windmills were gradually adapted for many other industrial uses including the pumping of water. European millwrights became highly skilled craftsmen and as colonisation grew, windmills spread throughout the world.

As steam power developed, the unpredictable power of the wind became less and less economic and as a result, only a small number of these elegant structures that once extracted power from the wind still exist.

These remaining windmills are an historic and photogenic reminder of a past technological age but a number of mills have been restored either visually, or in some cases back to full working order, as a result of the growing demand for organic and non-manufactured foodstuffs.

Whilst watermills were once commonplace many have lost their machinery and the buildings have been converted for other uses. Fortunately, the original structures of a number of others have been lovingly restored and they have become local tourist attractions.

Watermills were introduced into Britain by the Romans in the 1st century AD.

A watermill comprises a mill where power is produced by a large wheel that is turned by moving water.

Watermills have played a significant part in shaping our historic landscape and in the development of industry.

As well as powering mills and factories, waterwheels were used in mining, for drainage and hauling materials, for driving agricultural machinery and for pumping water for urban and domestic supply, before new industrial processes and electrically powered machines superseded traditional waterwheels.

Royal Mail spokesperson Philip Parker said: “The windmills and watermills of the UK are much-loved landmarks and reminders of our rich agricultural and industrial heritage. We celebrate six of these fascinating structures with new stamps.” 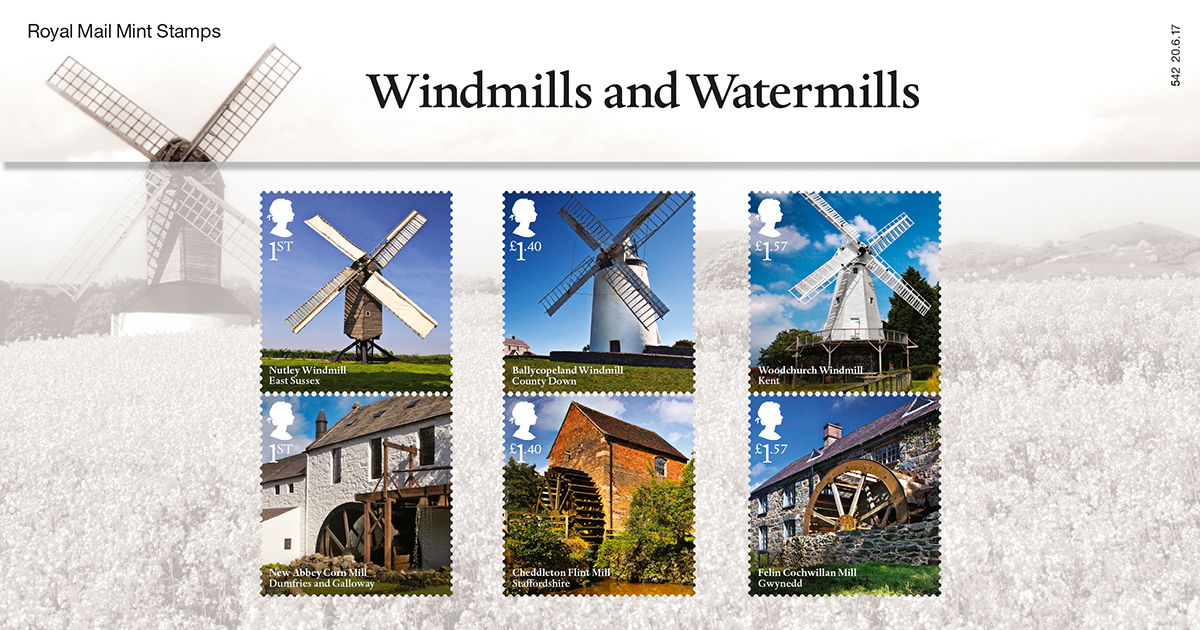 Nutley Windmill, East Sussex
Nutley Windmill is one of only five open-trestle post mills to survive in Britain. The oak post on which the mill turns has been dated to the mid-1500s, and is currently the oldest known post in England. Rebuilt several times, Nutley was moved to its present site in about 1830 and ceased working commercially in 1908, but was deployed again during the First World War. The mill contains two pairs of millstones driven by timber and iron machinery. In the early 1970s it was repaired and restored to full working order by volunteers, and it is now owned and cared for by the Uckfield and District Preservation Society.

Cheddleton Flint Mill, Staffordshire
Cheddleton Flint Mill stands by the River Churnet and is part of a small industrial complex where flint was ground for earthenware production by the local pottery industry. There are two mills, both driven by large-diameter, low-breastshot waterwheels. The southern mill, originally a corn mill, was converted in the late 18th century and a new north mill was built. Both have specialist machinery for grinding flint in water in large circular pans. The resulting slurry was dried in a kiln and sent by barges along the Caldon Canal to the Potteries. The site is managed by an industrial heritage trust that was established in 1967.

Woodchurch Windmill, Kent
Woodchurch Windmill is a traditional Kentish smock mill, formerly one of a pair. Such mills are typically found in areas where there is a strong tradition of timber building. The upper mill, which was used as an observation post in the First World War, was tarred black and the weatherboarding of the lower mill, which survives, is painted white. Dating from the early 19th century, the mill stopped work in 1926 and was fortunate to survive two decades of decay. The timber frame of the smock tower, which stands on a brick base, had distorted badly and the mill has subsequently been substantially rebuilt and restored to working order. It contains three pairs of millstones driven by four shuttered sails, a form patented in 1807. The sails and cap of the mill are turned to face the wind automatically by a fantail.

Felin Cochwillan Mill, Gwynedd
Felin Cochwillan, close to the Snowdonia National Park in North Wales, was built by the Williams family as a fulling mill, for processing woollen cloth, about 200 years ago. It was subsequently taken over by the Penrhyn Estate and converted to corn milling, grinding wheat, barley and oats. In 1901 the machinery was updated and the mill worked until 1955.The machinery was driven by a powerful breastshot waterwheel turned by water from the River Ogwen. There are four pairs of millstones, two driven by gearing and two by belt-drives, and ancillary machinery for producing oatmeal, including a kiln in which oat grains were dried prior to being shelled and ground. A second smaller waterwheel was introduced to generate electricity. The mill is now under private ownership and currently undergoing major repairs and restoration.

Ballycopeland Windmill, County Down
Ballycopeland Windmill is the last surviving example of over a hundred windmills that once stood in a rich grain-growing area of the Ards Peninsula in County Down. The stone tower mill dates from the late 18th century and contains four floors and machinery to drive three pairs of millstones, for grinding corn and shelling oats. Distinctive elements are the four roller-reefing sails incorporating a design patented by Captain Stephen Hooper in 1789, and now a unique feature on a windmill in the British Isles. The mill was commercially operational until 1915 and was restored in several phases between 1938 and the present day. It is now in the care of the Northern Ireland Department for Communities. An extensive programme of repair and restoration work is currently underway to preserve this historic mill for future generations.

New Abbey Corn Mill, Dumfries and Galloway
New Abbey Corn Mill is a late 18th-century mill that is thought to occupy the site of a watermill for grinding grain which was established in the 13th century by the Cistercian monks of the monastery of Sweetheart Abbey. The mill, miller’s house and kiln for drying oats are grouped together in one building, the mill having had an extra floor, for grain storage, which was added in the mid-19th century. The machinery and three pairs of millstones, for shelling and grinding oats and animal feed, are driven by a pitch-back waterwheel, water being fed from a mill pond lined with boulders onto the top of the wheel along a timber launder. New Abbey Corn Mill ceased working in the mid-20th century and, after repair and restoration in the 1970s, it was opened to visitors in 1983. The mill is maintained and cared for by Historic Scotland. 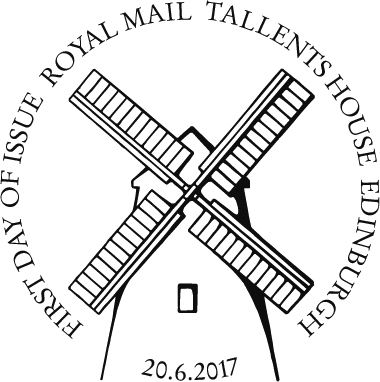